Last weekend I went to my 45th  high school reunion.   That would be the high school in Jackson, Mississippi, from which all the white people in the movie graduated.

We were a big school - 550 plus just in my class. And I have not kept up with people so well so I was kind of nervous when I  walked into the motel ball room.   My husband gave a little gasp and said Jeez - this is a lot of old white haired people! Reeeeeellly? I said back, pointing to my own white hair.

Maybe you know how these things go - there are big nametags which help immensely and you drift through the crowd happy to see people whose names you recognize - and you connect.  And that's really nice. And sometimes you look first into the eyes of someone you don't quite recognize and there glimmering, in their eyes who are also seeing you behind your aging disguise - there glimmering between you is belovedness, is deep friendship with one you had maybe forgotten existed, or maybe there glimmering behind the glasses and the wrinkles and the white hair is the love of your tenth grade life.  Eight, ten times this happened - this charming recognition of that which was old love being made new and shining. So that's very lovely and fine and the kind of homegrown transfiguration I expected and came for.

Then I looked across the room, and  I noticed gliding through the crowd an African American couple.  And that is something I did not expect and didn't know to come for.  For the woman in the couple - well -  can you remember back then or can you go there in your mind to Mississippi  back to the school year 1965-66?  James Meredith had entered Ole Miss amidst armed and howling crowds three falls earlier.  Medgar Evers gunned  down in his front yard in our town, two years earlier.  Can you imagine the eye of the storm of freedom rides and marches and sit ins and citizens councils plottings and churches with greeting committees blocking the doors to God's house?   And martyrdom?   It would be two and a half years before the demons of hate and fear get around to killing Martin Luther King but everybody sort of knew, certainly Dr. King knew.

And now can you imagine  a 17 year old African American girl in the midst of all that, who, (only two years after the setting of  "The Help") with six other black students in their senior, my senior year in the fall of 1965 desegregated the public schools in Mississippi by "taking that first step" as Dr. King says "when you can't see the whole staircase" through the door of that school which the white people thought of as OUR school?  And then picture them  staying?  I have pondered their witness through the years - the bubbles of isolation they moved in, the petty humiliations, the realistic fears for there were terrorists among us and the courage it took to endure.

So here it is 45 years later. We talked - she had never, ever been to a Murrah reunion which I had guessed.  Why go back to that, to us?   And I told her she changed my life which she did though I didn't know it then, and why would she?  I was just one of 500 plus white people almost all of whom tried to be somewhere on  the spectrum of polite indifference to her existence or active attempts to make her miserable.  And yes I remember Dr. King's sad truth, that it is the indifference of the good folk, the church folk, not the viciousness of the evil, that stings the most.

I asked her about it.  Why did she consent to do it?  And who helped her?  Well she said she did it, she was a witness for justice that year because of  her mother. I imagine her mother was a  member of one of the many imponderably brave black  churches in town and surely they were praying to Jesus in that church and  talking justice there in that church and they were teaching Paul's thing that suffering produces endurance and endurance produces character and character produces hope and hope does not disappoint.   And she told me her mother was a central member of the NAACP and so her mother was  part of the network of preparation, training, support across the whole civil rights movement.  And that year they had chosen for the first Mississippi school desegregations - get their strategy -   first graders and twelfth graders - those were the foot soldiers.

I think about the ordinary people who trained and supported her.  They looked at the world and the pain and injustice  of the world without squinting and then they looked beyond that and they could see justice and mercy flowing on up ahead like a mighty stream and they organized the people of God to walk toward, flow into that mighty stream holding onto  Christ and him crucified and risen from the dead to a world redeemed.  They could see a world already redeemed from sin and death.

Brenda works for the federal government now.  34 years.  Something about social security. And I said O, social security - my husband who is of an age of which I am not yet, said y'all are great and so helpful.  She grinned sheepishly and she said I'm in the not so popular part - I am in SSI - and we turn people down more than we wish we did.  So we nodded - because that's just the truth about SSI - and she asked what I did.  By the way there are three Episcopal clergy that came out of  that class - can you imagine why?  I think we were haunted. And our church has the language and the liturgy and the Godgiven humanity to help haunted people.

As we were parting she looked right at me and she said,  well really it wasn't just my mother.  I knew, I myself knew, even at that age,  it just wasn't right.  I was over there at Lanier and we would get y'all's old textbooks after you had torn them up. And that's not right.  So when they asked me to go, I thought about it.  I had played the clarinet all the way through in the band and had worked my way up to my senior year and had made majorette.

Now take that teenage sacrifice and put it in universal human terms - this is a kid who in her senior year gave up being a Somebody, a big-shot,  a majorette  - to go and empty herself and sacrifice herself and be despised and rejected. Which in the mystery of God's work for the transfiguration of the entire world leads to what?

So what I want to say is go enjoy the movie.  But then come on back out here and look around you. We still need all the help we can get.  We are witnesses in waiting.  Visionaries  sometimes without confidence or venue.  We are majorettes for justice who hear the distant, deeper drumbeat but sometimes we don't know how to join the march.

In spite of the seeming blindness of our political leaders to most people of faith and our shared values, we are people  who long for the transformation of this groaning, sin-sick world, who want our lives to have meaning,  who yearn as Eudora Welty says not to point the finger in judgment but to part the curtain, that invisible shadow that falls between people, the veil of indifference to each other's presence, each other's wonder, each other's human plight.

We need all the help we can get.  And we are also more full of grace and power and hope  than we know. 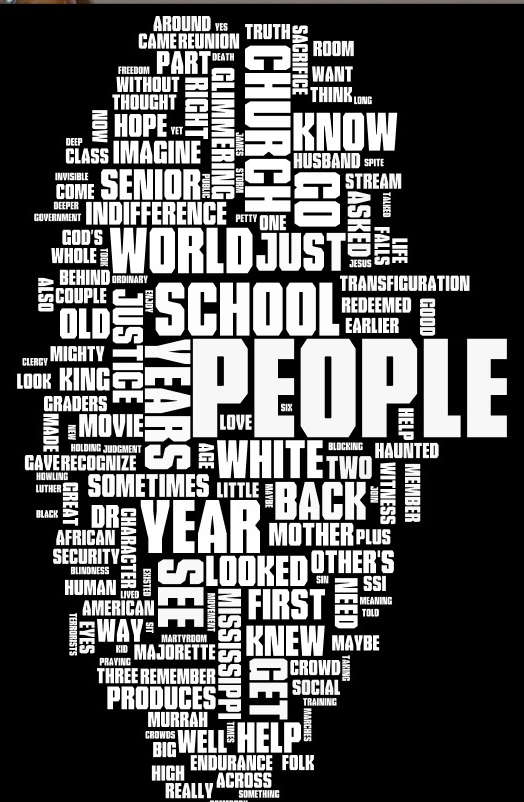