As Jesus was going along, people kept spreading their cloaks on the road. When he came to the descent of the Mount of Olives, the whole crowd of disciples began to celebrate and praise God at the tops of their voices" (Luke 19:36-37). The crowd went wild as he got nearer. This was the moment they'd been waiting for. All the old songs came flooding back, and they were singing, chanting, cheering, and laughing. At last their dreams were going to come true.

But in the middle of it all their leader wasn't singing. "When he came near and saw the city, he wept over it" (v. 41). Yes, their dreams were indeed coming true. But not in the way they had imagined.

He was not the king they expected. He wasn't like the monarchs of old who sat on their jeweled and ivory thrones, dispensing their justice and wisdom. Nor was he the great warrior-king some had wanted. He didn't raise an army and ride into battle at its head. He was riding on a donkey. And he was weeping, weeping for the dream that had to die, weeping for the sword that would pierce his supporters to the soul. Weeping for the kingdom that wasn't coming as well as for the kingdom that was.

Jesus's arrival in Jerusalem a few days before his death is one of the best-known scenes in the gospels. But what was it all about? What did Jesus think he was doing?

I have a clear, sharp memory of the moment when that question first impinged on my consciousness. It was the autumn of 1971. It was a month or so after our wedding, and I had just begun my training for ordination. New worlds were opening in front of me. But I hadn't expected this one. A friend lent me the album Jesus Christ Superstar.

I had known about Jesus all my life. Indeed, I venture to say that I had known Jesus all my life; better still, perhaps, to say that he had known me. He was a presence, a surrounding love, whispering gently in scripture, singing at the top of his voice in the beauty of creation, majestic in the mountains and the sea. I had done my best to follow him, to get to know him, to find out what he wanted me to do. He wasn't an undemanding friend; he was always a disturbing, challenging

presence, warning against false trails and grieving when I went that way anyway. But he was also a sigh-of-relief healing presence; like Bunyan's hero, I knew what it was to see burdens roll away. I had been many times around the cycle we find in the gospels in the character of Peter: firm public declarations of undying loyalty, followed by miserable failure, followed by astonishing, generous, forgiving love.

But as my bride and I moved in to our basement apartment, I listened to Superstar. Andrew Lloyd Webber was then still a brash young pup, not a Peer of the Realm, and Tim Rice was still writing lyrics with real force and depth. Some were worried about Superstar. Wasn't it cynical? Didn't it raise all kinds of doubts? I didn't hear it that way. I heard the questions: "Who are you? What have you sacrificed? . . . Do you think you're what they say you are?" These were the proper next questions, the other side of the story I had learned (or at least another side of the story).

It was as though all the energy of the popular culture of the 1960s had suddenly swung around, away from its preoccupation with sex, drugs, and rock 'n' roll, and was looking again at the Jesus it had almost forgotten. There was a sense of, "Oh, you're still there, are you? Where do you fit? What was it all about anyway?" Western culture bounced back at Jesus the question with which he had teased his own followers. Instead of "Who do you say that I am?" we were asking him, "Who do you say that you are?"

Rice and Lloyd Webber didn't give an answer. That wasn't their aim. I often point out to students that they come to a university not to learn the answers, but to discover the right questions. The same was true of Superstar. And the question it asked was, I am convinced, right and proper. It's not the only question about Jesus, not the only question we should ask of Jesus, but it's utterly appropriate in its own way. And necessary. Unless you ask this question ("Are you who they say you are?"), your "Jesus" risks disappearing like a hot-air balloon off into the mists of fantasy. This problem remains enormously important.

It is the question of who Jesus actually was. What he did, what he said, what he meant. It is, by implication, the question that any grown-up Christian faith must address. Is our sense of Jesus as a presence, disturbing but also healing, confronting but also comforting, simply a figment of our imagination? Was Freud right to see it as just a projection of our inner desires? Was Marx right to say that it was just a way of keeping the hungry masses quiet? Was Nietzsche right to say that Jesus taught a wimpish religion that has sapped the energy of humankind ever since? And-since those three gentlemen are now a venerable part of the cultural landscape in their own right-are today's shrill atheists right to say that God himself is a delusion, that Christianity is based on a multiple mistake, that it's all out of date, bad for your health, massively disproved, socially disastrous, and ridiculously incoherent?

Faced with these questions, whether from Rice and Lloyd Webber, Richard Dawkins, or anybody else, Christians have a choice. They can go on talking about "Jesus," worshipping him in formal liturgy or informal meetings, praying to him, and finding out what happens in their own lives and communities when they do so-and failing to address the question that has been in the back of everyone else's mind for the last century at least. Or they can accept the question (even if, like many questions, it needs redefining, the closer you get to it) and set about answering it.

I was not yet ready, in the autumn of 1971, to do the latter. But within a few years I had realized that I could no longer put it off. By then, in the late 1970s, I was ordained, preaching regularly, leading Confirmation classes, organizing worship. I was finishing my doctorate and teaching undergraduates. My wife and I had two children and more on the way. We were facing the challenges of "real life" on several levels. Why should I avoid the challenge of the real Jesus?

Every time I opened the gospels and thought about my next sermon, I was faced with questions. Did he really say that? Did he really do that? What did it mean? There were plenty of voices around to say he hadn't said it, he didn't really do it, and that the only "meaning" is that the church is a big confidence trick. If I was going to preach and, for that matter, if I was going to counsel people to trust Jesus and get to know him for themselves, I couldn't do it with integrity unless I had faced the hard questions for myself.

It's been a long journey. No doubt there is much more to discover. But this book will tell you, as simply as possible, what I've found out so far. 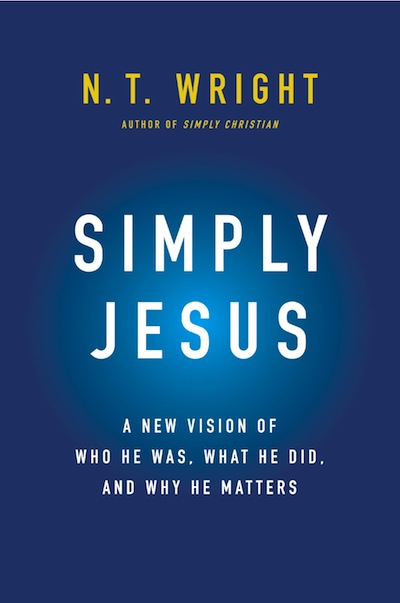 From Simply Jesus: A New Vision of Who He Was, What He Did, and Why He Matters. Copyright © 2011 by N. T. Wright. Reprinted with permission from HarperOne, a division of HarperCollinsPublishers.