Who's in? Who's out? Groups that are trying to protect themselves focus heavily on this question, particularly in times of conflict and controversy. They may have great ideals about welcoming all comers, but those who approach, thinking the doors are wide open can find criteria for entry magically appear like a velvet rope at the entrance to an exclusive club. Of course, part of the argument, implicitly or explicitly, is that those who do not meet the established criteria are somehow inferior to the insiders. After all, they are not really like us, are they?

Lately, this insider/outsider language has popped up with respect to the faith commitments of public figures, most notably President Obama. In the most recent incident, Rev. Franklin Graham had to apologize for arguing that President Obama's Christianity is not real, that, although he looks like an insider, he doesn't really meet the established criteria. Of course, Rev. Graham is not the first or only self-appointed bouncer putting up a velvet rope to establish who is and is not "inside" Christianity. The moves toward schism in various mainline denominations (including my own PC(USA)) because of arguments of where the velvet rope should be placed as far as ordination is concerned, is part of this same phenomenon.

Watch the video: Defending His Faith: President Obama and the Politics of Religion

Of course, establishing insider/outsider criteria is as old as human society. So it should be no surprise that the same tendency to try and determine who is and is not Christian can be found in this most beloved passage of Christian scripture, the passage that surrounds John 3:16, most recently elevated by Tim Tebow and the new ABC Series GCB.

The lectionary passage for this week begins in John 3:14 with a strange image of Jesus lifted up as a serpent in the wilderness. The reference is to the story in Numbers 21:4-9; in this story, Moses creates an image of a serpent that, when gazed upon, heals his people from death by snakebite. The snakes are a response of God to the rebellion of God's people. The implication in John's gospel is that belief in Jesus will heal and bring life to those who are dying in their rebellion from God just as the image of the serpent did.

Notice the open invitation in John 3:14-15: anyone who believes. This seemingly open invitation continues throughout this most over-cited of biblical passages: John 3:16. In it, eternal life is open to anyone who believes, or as the King James so eloquently puts it "whosoever believeth." Indeed, as the author underscores, "God did not send the son into the world to condemn the world." (3:17)

But then, in John 3:18, the velvet rope appears. The community establishes criteria of who is the "whosoever."  And who is it that really belongs? Those who believe in the name of the only Son of God belong (3:18). Already the criteria, interestingly, do not necessarily exclude the majority of John's world who worship multiple gods, a practice known today as polytheism. After all, one can be polytheistic --worshiping Zeus and Isis and Artemis-- and still believe in the name of Jesus as the Son of God. Instead, John's criteria exclude the Jewish community from whom John's community is in schism. This Jewish community's central confession, that God is one, would have excluded the possibility that Jesus was God's only son, who was both in the beginning with God and who was God (John 1:1).

But John's velvet rope does not just require belief for admission. It also requires actions. This is the restriction put in place by 3:19-21. John's restriction was probably put in place against secret Christians or Christians who lived a double life under the oppression of the Roman Empire. But, the argument of what consists "evil deeds" done in secret vs. "true deeds" done in plain view can certainly translate to today's culture wars. This sort of argument is precisely why a Christian minister like Rev. Graham might have the temerity to declare someone who has publicly and repeatedly expressed belief "in the name of the son of God" (3:18) to be "not really a Christian." These self-appointed theological bouncers have established a checklist - stated or assumed - of public actions and stances that one must perform or endorse in order to be allowed admission to the status of "Christian."

Be clear. Progressives do so also. Consider the viral rants by Bill Maher and Stephen Colbert about America not being a Christian nation. Both of these are based not on belief but on public actions and stances, this time on behalf of progressive concerns.

John's gospel highlights a tension in the library that is the New Testament. On the one hand, those who follow the theological reasoning of Paul argue that salvation is a function only of God's grace. On the other hand, the gospels, James and other writings give evidence that salvation is also a function of what one does. The velvet rope keeps changing position, with self-appointed bouncers appearing at random keeping "those people" out. So, what can we do with this tension?

Perhaps wisdom is found not in John 3:16 alone, but in remembering Jesus' words later in the same gospel: "I am the way, the truth, and the life." (John 14:6). Rev. Graham, political pundits and other self-appointed theological bouncers would do well to remember this verse. For the testimony of John's gospel is this: when it comes to admission to Christianity, the ultimate bouncer, and indeed the only valid bouncer, is Jesus. 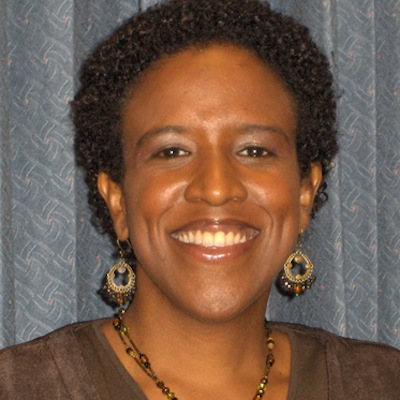 _ Rev. Margaret Aymer, Ph.D., D. D. is Associate Professor for New Testament at the Interdenominational Theological Center and a Teaching Elder in the PCUSA. She is the author of First Pure, Then Peaceable: Frederick Douglass, Darkness and the Epistle of James, and the 2011-2012 Horizons Bible Study, Confessing the Beatitudes. A native of the Caribbean, Dr. Aymer combines her scholarly training in early Christianity with her lived experiences of migration, and being black and female in the USA. She is happily married to Dr. Laurent M. R. G. Oget, a native of France, who is a software engineer (aka code poet)._

Learn more about the ON Scripture Editorial Board

ON Scripture is made possible by a generous grant from the Lilly Endowment.