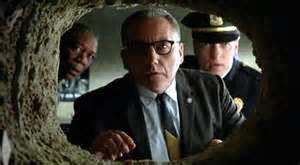 The Shawshank Redemption is at the top of my all-time great movies list. It is punctuated with great lines and saturated with rich spiritual symbolism. The warden, Samuel Norton, is an icon of toxic Christianity.

The warden presents himself as a socially respectable, church-going, Bible-quoting Christian. It becomes clear, however, from the moment he appears in the story that his Christianity is in name only. His faith has holes in it larger than the one Andy Dufrense chiseled through his cell wall.

When Andy and the other prisoners first stand before the warden, immediately the warden's self-righteousness dominates the scene. When one of the prisoners asks, "When do we eat?" the warden has him beaten. Holding out a Bible, he says to the captives, "Trust in the Lord, but your ass is mine.

Contrast the scene above with the one in Luke 4 where Jesus, in the synagogue at Nazareth, applies Isaiah 61 to his understanding of his mission:

"The Spirit of the Lord is upon me, because he has anointed me to bring good news to the poor. He has sent me to proclaim release to the captives and recovery of sight to the blind, to let the oppressed go free, to proclaim the year of the Lord's favor."

In one scene, the warden enters Andy's cell and lays hold of Andy's Bible. Andy and the warden quote Scripture verses back and forth as if in a Bible ping pong match. The warden does not open the Bible, which is a good thing since the rock hammer Andy uses to tunnel through his cell wall is hidden inside. 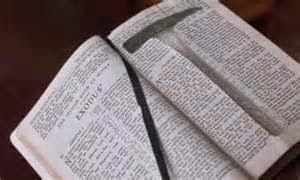 When the warden hands the Bible back to Andy he says, "Salvation lies within."

In healthy versions of Christian faith the Bible is employed as an instrument of liberation and transformation. In the hands of Christians like warden Norton it is used to clobber our LGBTQ sisters and brothers, and to oppress women, keeping them "in their place" under the authority of men.

For Jesus, compassion always trumped blind obedience to Scripture. Love of neighbor, which included both the oppressed and the oppressor, always claimed precedence over biblical prescriptions and precepts. Jesus clearly read his Bible with a bias toward love. Thus he knew which Scriptures to accept and reject, to obey and disobey, to submit to and to ignore and dismiss.

For example, Jesus completely ignored the laws of clean and unclean in Leviticus 13 and 14 pertaining to leprosy when he touched and healed the leper in Mark 1. ("Jesus stretched out his hand and touched him . . . Immediately the leprosy left him, and he was made clean!")

Also, when Jesus allowed a woman "who had been suffering from hemorrhages for twelve years" to touch him, he clearly dismissed Leviticus 15:25. ("If a woman has a discharge of blood for many days . . . all the days of the discharge . . . she shall be unclean.")

Jesus completely reversed the laws of clean and unclean in these situations: Instead of Jesus being rendered impure by an unholy touch, the "unholy" touch resulted in the leper and the woman being healed and made whole.

Jesus refused to allow Bible literalists to tell him who he was or what he could and could not do.

Now back to the warden's interchange with Andy, which ends with the warden quoting John 8:12:

"I am the light of the world. Whoever follows me will never walk in darkness but will have the light of life."

Of course, the warden does not have the foggiest notion what that verse really means. The warden walks in darkness and is about as blind and un-liberated a person as you would ever find. But he thinks he is a Christian.

Religion can easily become a cleverly disguised way of protecting the ego-a way for us to feel secure, superior, safe, and in control. Jesus saw right through this.

Isn't it interesting that Jesus enjoyed hospitable table fellowship, not with the moral majority, but with the immoral minority? The gatekeepers were invited, but they didn't want any part of those Jesus kept company with. The religious officials were not comfortable around Jesus, while many "sinners" were drawn to him.

Those who thought they could see were actually blind, while those who knew they were blind found spiritual sight.

What would Jesus say to warden Samuel Norton? Perhaps what he said to the religious leaders in John 9 when they asked him sarcastically: "Surely we (the religious elite and gatekeepers) are not blind, are we?"

"If you were blind, you would not have sin. But now that you say, 'We see,' your sin remains."

Is there a bit of Samuel Norton in all of us? I suspect there is. If we are certain that we see, then we are probably blind, and our sin (our illusions, ego defenses, false attachments, addictions to power, control, etc.) remain. Healthy religion and authentic spirituality have nothing to do with being correct or citing Bible verses. Nor is it about wearing the right badges or shouting the right pledges. There is no "Roman Road" or "Four Spiritual Laws" that lead to salvation. There are no five steps, or six principles, or seven habits for highly spiritual people.

What we Christians have is Jesus. And the real test of genuine faith is whether or not we have the passion and will to imitate him-to love the way he loved.

There are two dramatic scenes that I like to imagine represent the outcomes of these two different approaches to Christianity (or religion in general):

Scene 1: When the warden's money laundering is exposed and the authorities come to take him into custody, he looks over at a message hanging on his office wall about God's righteous judgment coming soon. Next, he pulls the trigger that ends his life.

Scene 2: On a night of heavy thunder and rain, Andy crawls through the hole he has patiently dug month after month, year after year from inside his cell. He reaches a pipe barely large enough for a human body, full of sludge, which eventually empties into a creek beyond the prison fence. With the storm as a cover, he busts through the pipe, crawling through the sludge. When he eventually "dumps" into the creek, he rips off his prison clothes in a moment of jubilation celebrating his new found liberation. 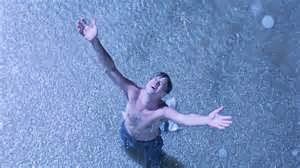 Andy's experience can be our experience when we follow Jesus into a larger world beyond the prison walls of Bible worship and toxic religion-a world permeated and pervaded by love of God and love of neighbor. 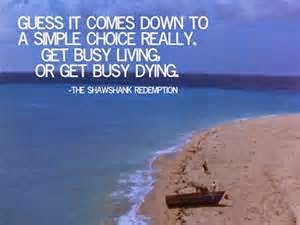 From Chuck's Blog, A Fresh Perspective