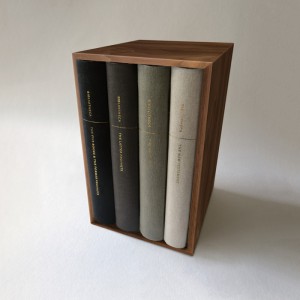 Bibliotheca: Making the Bible a beautiful book that will be a joy to read.

Today I wrote a letter to Adam Lewis Greene, who is known for his wonderful project, Bibliotheca, which achieved an awesome level of crowdfunding through Kickstarter. And yes, I'm one of the nearly 15,000 backers.

It is a great concept. Greene is publishing a new edition of the Bible as four (or five, if you include the deuterocanonical books) separate books, each beautifully bound, with the text laid out for reading rather than for studying. So there's no verse numbers, endless annotations, or anything else to detract the reader from simply being present with the text. It's very much a "lectio divina" approach, so needless to say I was sold immediately.

Greene is doing something quite interesting with this text. He is taking an older translation that he personally loves - the American Standard Version of 1901, which is a precursor to the Revised Standard and New American Standard Versions - and using it as the basis of his text, but he is making some editorial changes. He is modernizing archaic language (so each "thou shalt" will become "you shall"), and also using another older translation, the Young's Literal Translation (1862), to correct some verses that are either poorly translated or poorly rendered in English. So in effect, Greene will be joining the ranks of folks like Eugene Peterson, J. B. Phillips and Ronald Knox by rendering his own unique version of the Bible (although based on the ASV and YLT versions).

Longstanding readers of my blog will know that I have a bee in my bonnet over Psalm 65:1, which has often been badly translated, thereby stripping the verse of its powerful contemplative meaning. The Hebrew makes a powerful statement for the spirituality of silence: To you, silence is praise, O God. But the Hebrew word for silence in this verse also has the connotation of "waiting," so translators have tended to ignore the quality of silence (even though doing so makes the verse largely nonsensical). Sure enough, the ASV mangles the verse, rendering it "Praise waiteth for thee, O God, in Zion; And unto thee shall the vow be performed." But the YLTalmost gets it right, rendering it "To Thee, silence - praise, O God, [is] in Zion, And to Thee is a vow completed." Which means that Adam Lewis Greene has an opportunity not only to create an heirloom-quality edition of the Bible featuring his own translation (how cool is that?), but he also can make sure that Psalm 65 is faithful to the source text in Hebrew.

So I wrote Mr. Greene a letter, and I'm posting it here, in the hopes that if he doesn't manage to read my email, perhaps this will get his attention. The text of the letter follows. But first: if you missed the Bibliotheca Kickstarter campaign, it's not too late to order the set for yourself - for a limited time, you still can pre-order Bibliotheca. But do it soon; it's my understanding that this is meant to be a limited edition Bible, so once Greene closes the order site, then it will be too late.

Okay, here's what I wrote to him.

Like so many others, I am excited about Bibliotheca, and look forward to receiving my copy when the time is right (I'm Catholic, so I'll be getting the five-volume version).

I'm very interested in your approach of using the ASV but also consulting the YLT for "difficult" verses.

With that in mind, I'm writing to make a special appeal about a verse that I think is so often mistranslated, but Young's gets it (mostly) right. The verse in question is the first verse of Psalm 65.

The ASV: Praise waiteth for thee, O God, in Zion; And unto thee shall the vow be performed.

The ASV follows a mistranslation that has its roots in the Septuagint. If you look at the Hebrew text, the word dumiyyah occurs in the verse, a word which means attentive or waiting silence. It also appears in Psalm 62 ("My soul waiteth in silence for God only") and Psalm 39 ("I was dumb with silence"). "Praise waits for you" is a garbled expression - it anthropomorphizes praise. Whereas the literal translation: "To you, silence is praise" makes a profoundly meditative, contemplative statement. And if the Greeks misunderstood it, the rabbinical tradition kept it pure. The orthodox Jewish "Artscroll" translation gets this verse right ("To you, silence is praise, O God in Zion") and the medieval rabbinic scholar Rashi (1040-1105), when commenting on this verse, wrote, "The praises of infinite God can never be exhausted. Silence is his most eloquent praise, since elaboration must leave glaring omissions."

So I am writing to you to appeal to your good judgment to let a literal translation of this verse be incorporated into Bibliotheca. I think you could render it one of two ways:

Silence is praise for you, O God, in Zion; and unto you shall the vow be performed - this would retain as much of the ASV as possible;

To you, silence is praise, O God in Zion; and to you is a vow completed - relying more directly on Young's.

I would be thrilled with either of these renderings.

Obviously, this is your project and I know you must be faithful to your own research and understanding, but I do hope you will carefully consider the meaning of the original Hebrew for this particular verse. Don't anthropomorphize praise - let silence be praise.

From Carl's blog "A Contemplative Faith" at Patheos.com