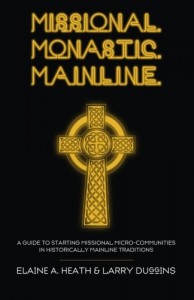 Elaine A. Heath is a true friend of contemplation.

She recognizes the vital importance of bringing contemplative prayer and mystical spirituality not only into the local church, but into the hearts of the clergy and other ministerial leaders in the church. As a seminary professor (she teaches Christian Evangelism at Perkins School of Theology in Dallas) and Methodist elder, she understands the crisis that mainline churches are facing in our time; while as a student of the contemplative tradition, she also appreciates the unique gifts that the wisdom of the saints, monastics and mystics can offer to faith communities today. Her 2008 book The Mystic Way of Evangelism considers how church communities can find inspiration and guidance from figures like Julian of Norwich, Mechthild of Magdeburg, and Bonaventure - along with more recent figures like Hans Urs Von Balthasar, Thomas R. Kelly and Henri J. M. Nouwen. Heath shows how the wisdom of these great contemplative exemplars, far from being just garden variety piety, can actually point to a vibrant re-imagining of Christian community and ministry, with an emphasis on justice, kenosis, humility, and inclusive community.

Now Heath has taken her work further. Her latest book, co-written with Methodist pastor Larry Duggins, explores how new communities of faith ("neo-monasticism") can be cultivated in the context of the historically mainline churches. Missional. Monastic. Mainline. is a slender book that approaches its topic in an inclusive way, making the argument for why a neomonastic community in a mainline church setting makes good theological sense, but also providing practical guidance on how congregations can begin to explore the question of whether fostering this kind of intentional community makes sense or not.

It's an idea that I think deserves to be spread as widely as possible. Roman Catholicism and Eastern Orthodoxy (and to a lesser extent, the Anglicans and Lutherans) have long recognized that intentional community - in the form of monasteries, convents, and friaries - form just as essential a part of the larger Church as do local congregations or regional adjudicatory bodies like dioceses or conferences. Sadly, because of widespread problems and corruption within monastic culture at the time, most of the sixteenth-century reformers felt the church would be better off without monasteries. How ironic, therefore, that the twentieth century Evangelical world spawned a vibrant, if marginal, "neo-monastic" movement of intentional communities of faith, that often bear little or no external resemblance to "classic" monasteries - no mandatory celibacy, no chanted liturgy, no cloister or custom of silence - but that do provide a meaningful location for Christians who seek a communal expression of their faith, one that finds expression in terms of missional outreach, often to the most vulnerable members of society.

So, with classic monasticism a feature of the Catholic/Orthodox world, and neo-monasticism a vibrant emergent trend among Evangelicals, it seemed that only the mainstream Protestant churches - the Methodists, Presbyterians, United Church of Christ, and so forth - are missing out on the fun. Heath and Duggins seek to redress that gap. So whether you are inspired by the ancient wisdom of saints like Benedict and Bernard of Clairvaux on the one hand, or contemporary visionaries like Shane Claiborne and Jonathan Wilson-Hartgrove on the other, Missional. Monastic. Mainline. explores how to weave intentional community (residential or non-residential) into the life of your local congregation, with an emphasis not only on shared prayer and inner growth, but also (and perhaps primarily) on finding new ways to bring Christ into a world that seems increasingly to have abandoned gospel values. In other words, such communities might offer hospitality and prayerful presence in neighborhoods struggling with poverty, drug abuse, racism, or other social concerns. Neo-monastics often gravitate toward what has been called "the forgotten places of the empire" - neighborhoods or communities where high unemployment, aging infrastructure, white flight, or other dynamics that threaten the well-being of the residents. How do neo-monastics make a difference in such settings? Well, the answer to that question is as unique as each local context: neo-monastics might spearhead a community garden; lead or support neighborhood watch programs, food pantries, or other forms of social support; engage in advocacy or direct political action on behalf on their localities; or simply provide a prayerful presence of hospitality and neighborliness - values that often seem to be sadly in short supply in America's neighborhoods today.

Why should the historically mainline churches get involved in this admittedly new and marginal movement? For several reasons. Mainline churches are, at least in theory, communities of faith anchored in a specific neighborhood or locality, so their missional identity is not unlike the purpose that neomonastic communities often embrace. In other words, mainline churches and neomonastic communities can, at least in theory, be natural allies. Furthermore, many mainline churches are struggling with declining or aging membership and falling revenue - worrisome trends, especially in an overall economy that is pretty much geared toward continual growth. Consequently many mainline congregations are engaging in significant "soul searching" as they seek to identify meaningful ways to stay true to their identity and mission in today's rapidly changing society. One of the realities of the decline in mainline church attendance is that many churches are building-rich - custodians of large, often quite beautiful, facilities that go underutilized in neighborhoods that seem to be just as troubled by decline as the churches themselves. This, according to Heath and Duggins, points to the elegant logic of a mainline-monastic alliance: new intentional communities often have plenty of creativity and vision, but lack resources like a physical plant where the vision could be tried out. A church with an empty parsonage or rectory, or even an under-used church building itself, can host a "start-up" neo-monastic community with little or no capital expense, providing a partnership where the intentional community brings much needed energy and excitement into a setting hosted by the established congregation. Such partnerships might not always work, but when they do, the potential exists for the monastics to thrive and the mainliners to experience a revival - in the best sense of the word.

This is the basic thesis behind Missional. Monastic. Mainline. The book itself is pretty much a nuts & bolts manual for those who are interested in forging this kind of partnership, whether on the mainline or neo-monastic side. Thus, the book offers suggestions for getting such an alliance off the ground: how to form a leadership council, draw up agreements between the parties, and establish a structure for the nascent community - again, whether residential (all the "monastics" living together), non-residential (members live separately, but come together for meals, worship, and ministry) or a hybrid. Because this concept is so new, the book seems a bit light on providing concrete examples of what does and does not work. But the authors do provide some illustrations from their own experience, particularly concerning a pilot project that took place one summer in Asheville, NC. I hope that as more church-community partnerships happen - whether long- or short-lived - that Heath and Duggins will gather insight and information to eventually revise the book, making it a bit more substantive. One idea that leaps to mind is L'Arche, a community with about 50 years experience of forming intentional communities, often in partnership with mainstream churches. Granted, L'Arche has a narrow and very specific mission, but I still suspect that it is a community with much to offer the neo-monastic movement. Other possibilities include the Catholic Worker Movement, Sojourners, and the house church movement. I'd also like to see more discussion of how the great monastic exemplars of the past - the Sts. Benedicts and Bernards, not to mention the mystics and saints down the centuries - might have wisdom to illuminate this kind of missional alliance in our day.

But for now, this book is an inspirational resource for anyone pondering how mainline churches can explore new models of mission or outreach, and how to support the fledgling neo-monastic movement at this point in history. Just know that if you read it, do so with an understanding that it will challenge you to do your part to contribute to this kind of missional work in your own neighborhood. Let God - and the needs of your locality - be your guide.