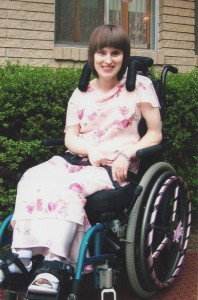 Rhiannon before her senior prom, 2007. Her wheel chair is decorated for the occasion.

Back in May, I wrote a post about my daughter's decision to enter in-home hospice care. Rhiannon struggled with health issues, related to polycistic kidney disease, her entire life, and spent 26 of her 29 years in a wheelchair. I first blogged about her challenges back in 2010. Today's post is the inevitable conclusion to her story.

Rhiannon passed away on August 30. Here's a link to her obituary.

Maybe the easiest way to write this post is to begin with the message we sent out to the 175 family members and friends who were on her email list. This email went out on Tuesday, September 2.

Please forgive me for not getting an email out sooner - the last three days have been a blur.

We sent out an email just last Tuesday about Rhiannon. The very next day - Wednesday - things began to change, and on Saturday afternoon they changed forever.

Our beautiful, precious young lady has been called into the silence of eternity. Our hearts are broken, but we also trust in the mercy and love of God.

Recently Rhiannon had been struggling with edema (swelling) and a gradual build-up of fluid in her lungs. Apparently this week she hit the tipping point, for she showed some difficulty breathing even Tuesday night, and by Wednesday she suddenly became lethargic and didn't want to get out of bed. We called Lisa, her nurse, who came and assessed that her lungs were now critically congested. We made some changes to her medications, upped the frequency of her albuterol and basically kept her on oxygen non-stop. At that point we were still hoping "she could bounce back from this" when Lisa, her nurse, left our house.

But by early Thursday morning, just after midnight, Fran woke to find Rhiannon gasping for breath, her lungs rattling, and in considerable distress. We called hospice, ended up with Lisa on the phone for over 90 minutes (we already knew she was an awesome nurse, but this sealed the deal) until the on-call nurse arrived at 2 AM. It was a harrowing couple of hours, but finally we managed to get her breathing stabilized and get her calm to the point that she was resting (and Fran and I could get back to sleep as well).

Beginning Wednesday, Rhiannon could no longer keep down solid foods. We had been giving her a diuretic but her kidneys simply stopped producing urine. She was on oxygen around the clock, but required someone to monitor her continually, because her nose would itch and she would push the oxygen mask away to scratch it. Then, without the oxygen, she would drop into lethargy until someone replaced the mask.

To help her keep breathing as best we could, she received a variety of meditations, some as frequently as every two hours - around the clock. By Thursday, the nurses's assessment was stripped of all optimism. "It's possible she'll die this weekend," Lisa said. Prophetic words indeed.

Our priest visited our home on Thursday and graced Rhiannon with the Anointing of the Sick. For her Viaticum we shared one host between the three of us, Fran breaking a small piece and tenderly placing it in her mouth.

Over the course of her last few days, Rhiannon seemed almost to be moving "in and out" of her present life, at times speaking words that revealed she was deeply aware of what was going on, not only with herself but also her loved ones - and yet at other times clearly appearing to be lost... in thought? or in prayer?

Then, shortly after four PM Saturday, Fran and the weekend CNA were administering her medicine when they noticed her breathing abruptly changed. Her breaths came farther apart; the CNA took her blood pressure and found it was dangerously low. Fran called for me; I ran into the room to see Rhiannon totally unresponsive. I felt for a pulse and found it, weakly, but soon it was clear that she was letting go. Her eyes rolled back, her head drooped, and Fran embraced her, telling her she loved her and that if she needed to go, we understood. Rhiannon died in her arms. 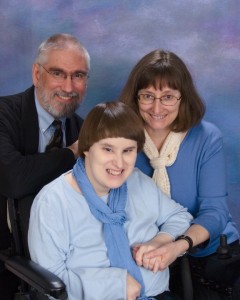 Before she died, Rhiannon asked Fran and me, individually, to promise her that we would care for the other. We are taking that promise seriously - so our first priority right now is to take good care of ourselves, and of each other. So we might not be able to reply to your messages of condolence or offers to help very quickly. Thank you for your understanding and love.

As I said above - our hearts are broken. But we also recognize that when someone is as sick as Rhiannon, often the best and truest miracle is simply the grace to rest in eternity, cradled in the love of God. So at this point, we choose simply to trust, and our prayer is "thy will be done."

When Father John came to the house Saturday evening to pray with us over Rhiannon's body, this was his word for us: Rhiannon is now at rest... so we need to be resting too.

Rhiannon's body was cremated and her ashes will be interred in an urn handmade by the Trappist monks of New Melleray Abbey in Iowa. I'll send out an email later today with funeral and visitation information.

We are so grateful for all our friends, family and loved ones - your care and your prayers mean the world to us.

It's been over two weeks now since that message went out, but it's all been a blur. At our pastor's urging, Fran and I left Atlanta to spend several days with friends in Asheville, NC, as soon as the funeral arrangements were made. It was a lovely respite, but we hit the ground running when we returned, putting together a slideshow for Rhiannon (the images in this post are some of the 333 that made it into the slideshow) and writing our eulogies (which I will post here later). The vigil and funeral were, likewise, kind of a surreal kaleidoscope - hundreds of people at each event, with out-of-town family vying for attention with friends we hadn't seen in years. It was beautiful, wonderful - and for two introverts, exhausting. Rhiannon was the extravert in our family - she would have just kept going, but Fran and I had to be mindful of our limits. We carefully designed the funeral to reflect music and readings that embodied Rhiannon's joyful, playful spirit. From the lyrical beauty of "All Creatures of Our God and King" and "Love Divine, All Loves Excelling" to the exuberance of an upbeat workout of "I'll Fly Away" (probably Rhiannon's favorite "go to heaven" song), every detail of the mass was designed to emphasize celebration before mourning, joy before lamentation. Given who Rhiannon was, it was an easy liturgical feat to pull off.

So the whirlwind of the days following her death are behind us. This past Monday Fran returned to work, and so did I - although for me that means adjusting to the new sense of silence and emptiness that surrounds my home office, since Rhiannon (and her continual rota of nurses and caregivers) are no longer in the house. Thankfully, I have a lot to do, which could mean I simply distract myself from my grief rather than allowing it to overwhelm me. I think that's okay. I'd just as soon encourage the grief to come in waves over time, rather than all at once. Not sure that's even possible, but that would be my preference. The other day I posted this tweet:

I suppose I was naive to think that I could somehow "manage" the grief, or that it would be less overwhelming than it turned out to be. But I'm optimistic by nature, so naturally I thought this would be easier than it has turned out to be. Silly me.

Forget all the blather about "stages of grief." Denial, anger, depression, bargaining - it's all slamming me at once. I'm rather just walking around in a daze, to be honest. I cry a lot, of course. I get sad. And then I also feel tremendous gratitude, for the amazing gift that my daughter was (is) to me and so many others, gratitude for how much I learned from her, gratitude for all the people who did and still love her and her mom and me. 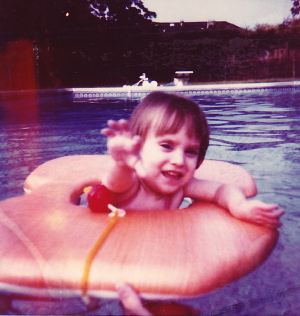 1988. Rhiannon, age 3, reaches for the camera with her right hand. Shortly after this picture was taken, she had a major stroke, leaving the right side of her body paralyzed for life.

Many well-meaning friends and loved ones say things like "At least she's in a better place now" or "She's no longer stuck in a wheelchair" or "Well, her suffering is over." That's all true and I believe it - thank heaven for my faith, or I think my sense of being plunged into an abyss would be far more engulfing than it is. And I don't mean to criticize the genuine love and concern from the many people who care. But every time I hear a comment like that I want to scream, "I'm not crying because I don't have faith, or because I don't trust God. I'm crying because I miss my daughter." It's really that simple. Call me selfish, or self-absorbed, or whatever. I suppose grief has a self-involved quality about it. And I don't think that's a bad thing. Jesus assumed we would love ourselves - after all, didn't he say "Love your neighbors as yourself"? So under the rubric of self-love comes a variety of things, from the fact that even people with strong faith feel grief, and even the most giving, considerate person will feel an emptiness when a loved one passes away. It's just plain normal.

It's not anything anyone can fix, nor can it be neatly resolved in an hour (or a week or a year). Living in a society that is so used to examining our emotional or inner lives in the framework of a TV show or movie, we like to think that even the most complex problems or issues should be tidily resolved in 50 minutes or so. But that's not how life works, is it? Maybe in our marketing culture, where the messiness of grief and loss cannot be easily tracked to consumer advertising, many of us would rather just pretend that the raw, scary, heartbreaking emptiness of mourning would just go away. But it won't. It's real, and it's messy, and it's something everyone who lives long enough will experience, more than once. And that's where I am right now.

Sorry to end on rather a downer, but hopefully honesty will make up for the somber quality of these words. And I'm still a person of faith. "Though he slay me, still will I hope in him." So I do hope. But it still hurts. 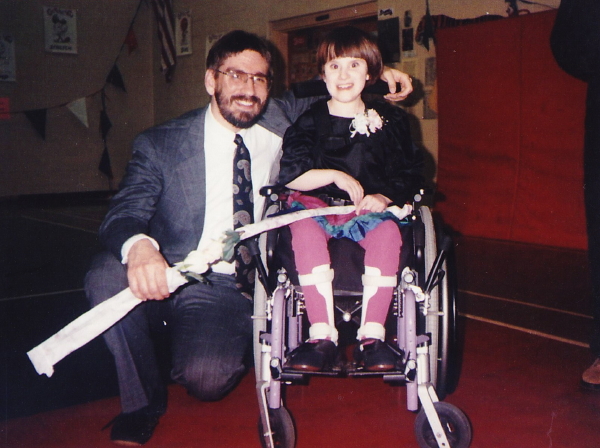 Mid 1990s. Rhiannon asked me to be her escort at homecoming. When this picture is taken, I had no idea how it would make me sob after her passing. 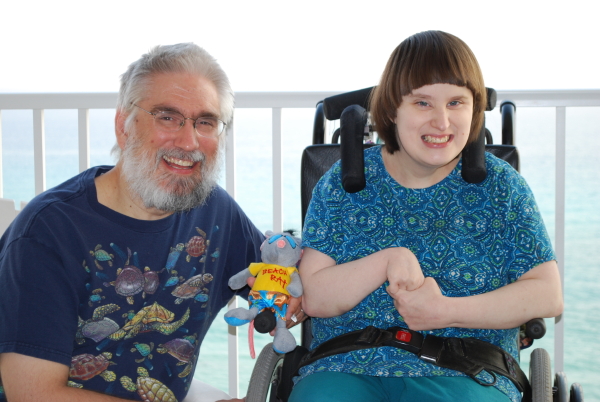 Spring 2012. At one of our favorite vacation spots, the Gulf Coast. Rhiannon, her mom, and I had won the "Beach Rat" plush earlier that day at an arcade.