_ Probably not the best guide to contemplative prayer... _

Timothy Keller, the popular New York City Presbyterian pastor and author of several bestselling books, is out and about promoting his newest work, called Prayer: Experiencing Awe and Intimacy with God. I haven't read the book, and normally I would applaud a new book by a prominent author encouraging people to pray. But after reading an interview with Keller on MSNBC this morning, I'm nervous about this title. Based on the interview, at least, it seems that Keller has no idea what he's talking about when it comes to Christian contemplative prayer.

Here's what he said, and a few thoughts in response.

The interviewer asked, "What do you make of the push made by some churches to embrace contemplative prayer, like lectio divina?"

The problem is that with the word "contemplative" and even the term, lectio divina, if I ask five different people to define it, they're going to give me five different definitions, so I can't count on one definition in people's minds. I would say, here's all I know, I think you don't try to get beyond words in order to pray because I think God's personal. I don't believe He's the impersonal ground of all being, so that you get beyond all rational thought in order to have oneness with all of the world. That's a Buddhist eastern concept. It's not the Christian concept because the Christian concept of God is that He's personal, and therefore, you don't get beyond rational thought. You fill your mind with rational thought. Lots of things. Words. Truth. And it should be grounded in the Scripture, if I'm going to hear from God, I want to know where has God spoken to me? He speaks in the Word, so in that sense, don't get beyond the Bible. Contemplative, if that's what that means, then I wouldn't be for it.

Let's take a closer look at this, sentence by sentence. Keller begins with this disclaimer:

The problem is that with the word "contemplative" and even the term, lectio divina, if I ask five different people to define it, they're going to give me five different definitions, so I can't count on one definition in people's minds.

And if you ask five different people to define God, you'll get five different definitions. Or if you ask five different people to define love, you'll get five different definitions. I think Keller is starting off with this cop-out as a way of saying, "Look, I don't really know what contemplation is." I bet dollars to doughnuts he was not trained adequately in seminary on the subject of contemplative prayer. That's not his fault, that's an indictment of the entire sweep of post-Reformation theology and how Christianity lost its own contemplative heritage for centuries. But Keller should be courageous and humble enough to admit when he doesn't know something. It would have been so much more graceful if he had just said, "You know, you're asking a question about a type of prayer with roots in the fourth century that just wasn't closely examined in a Protestant seminary in the 1970s, so I must confess I'm really not that knowledgeable about it." But no, he goes on to put his foot in his mouth repeatedly.

I would say, here's all I know, I think you don't try to get beyond words in order to pray because I think God's personal.

By this logic, is Keller suggesting that you can't have a "personal" relationship with a baby until he or she learns to talk? Or with anyone who is mute? Or with someone lost in dementia? For that matter, my wife and I have a profoundly loving relationship and we often spend hours together in silence. Nonverbal communication really does exist, and it really exists between God and humanity, too. If we insist that the only way to relate to God is by talking to him, then frankly, it's a pretty one-sided relationship.

I don't believe He's the impersonal ground of all being, so that you get beyond all rational thought in order to have oneness with all of the world.

I have no idea where this idea came from, but it's not from Evagrius, or John Cassian, or Richard of St. Victor, or Guigo the Carthusian, or The Cloud of Unknowing, or John of the Cross, or any of the other great contemplative masters. Christian contemplation has never asserted God is the "impersonal ground of all being." Praying to God in silence is not an assertion about the nature of God, rather, it is a gesture of welcoming and rest in God's loving presence.

I don't want to put words in Keller's mouth, but now it seems that he is saying "Oh, I don't like contemplation because it reminds me of Buddhism." Probably the single biggest fear among Christians who don't understand contemplation is that it's "Buddhist" or "eastern" or "new age." Meanwhile, every year more and more Christians abandon their faith and explore Buddhism or Vedanta because pastors like Keller are not equipped to introduce their congregation to the Christian practice of contemplation. Every pastor should be able to explain the difference between Christian contemplation and Buddhist meditation, without knocking or misrepresenting our own tradition. And, I should add, just as Christians are not afraid of the Passover seder or of vestigial pagan practices like Christmas trees and holiday mistletoe, maybe Christians need to be a little less afraid of Buddhism anyway. But that's another conversation for another day.

Once again: resting in contemplative silence is not a repudiation of the personal nature of God. For Christians, contemplation actually is an affirmation of it, since silent prayer is a seeking of loving intimacy that does not require the limitations of human language. And yes, you can and do get beyond rational thought. There's a word for it in Greek: metanoia, which literally means "beyond the mind." Jesus used it, it's in the Bible, it gets translated as "repentance" which most people misunderstand as just making a cognitive decision for Christ, but the Greek word means something much richer and more existential than that.

You fill your mind with rational thought. Lots of things. Words. Truth.

Yes, it is the mind's job to generate thought, just like it's the heart's job to beat and the lungs' job to breathe. But when we physically rest, we hope our heartbeat and breathing rate slows down; likewise, when we rest in God through contemplative prayer, we seek a slowing-down of the mind's incessant chatter. Furthermore, the mind doesn't just generate truth - it also generates illusions, anxieties, fears, dreams, and even lies. And the Desert Fathers and Mothers, ancient Christian teachers like Evagrius, understood that the thoughts in the mind can be a source of affliction and a temptation to sin. Learning to rest in the silence that is always there, between and beneath our thoughts, is a way to relate to God beyond words. And pure silence, unlike afflictive thoughts, is never a temptation to sin.

And it should be grounded in the Scripture, if I'm going to hear from God, I want to know where has God spoken to me?

Well, yes, Christian contemplation should be grounded in scripture, I agree. That's the purpose behind lectio divina, which begins with reading scripture. And throughout the tradition, scripture is commended as the source of "prayer words" - verses to use while entering into contemplative silence. Once again, Keller reveals he doesn't understand the very thing he is so quick to criticize. Christian contemplation is immersed in scripture and rests in silence.

He speaks in the Word, so in that sense, don't get beyond the Bible.

The fallacy here is the idea that contemplative prayer - the prayer of silent resting and watchfulness - is somehow opposed to the Bible. But that's just not true. I've discussed this elsewhere. For now, just one verse: "For God alone my soul in silence waits." Psalm 62:1.

Contemplative, if that's what that means, then I wouldn't be for it.

I believe anyone who really takes to time to examine the Christian tradition will recognize that Keller's overly-cerebral and xenophobic concept of contemplation is nothing like what authentic, historical Christian contemplation is. 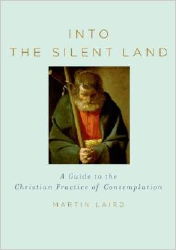 _ Now this is a book worth reading about contemplation. _

And I hope that Keller (and others like him) might in the future take the time to learn about Christian contemplation before simply knocking it out of hand. Don't quench the Spirit, as Saint Paul says.

If you're reading this blog for the first time and would like to learn more about authentic Christian contemplation, I would recommend either Martin Laird's wonderful Into the Silent Land: A Guide to the Christian Practice of Contemplation or my book Answering the Contemplative Call. These are works grounded in historical Christianity, not modernist misunderstandings.