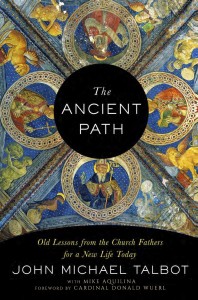 If you're anything like me, the first thing you'll notice about The Ancient Path: Old Lessons from the Church Fathers for a New Life Today is how beautifully designed the book is. The dust jacket features a fifteenth century fresco by Giovanni Pietro da Cemmo, of Saints Ambrose, Augustine, Gregory the Great, and Jerome. It is simultaneously elegant and inviting. The book itself presents a polite and at times engaging story in which a popular Catholic musician tells the story of his own spiritual journey - and how the great Fathers of the Church have inspired and illuminated the way for him. It's an enjoyable read, providing a nice introduction to the Fathers, although I'm not sure it manages to make the case for why they are so important today.

The primary author, John Michael Talbot, probably needs no introduction: as perhaps the most well-known Catholic musician of our time, he has recorded upwards of fifty albums (such as Table of Plenty), written or co-written twenty books, and even in his 60s maintains a busy schedule of touring and promoting his television show, "All Things Are Possible." Much of his music is a gentle folk or folk-rock style that shows off his pleasant tenor voice. His best work is richly contemplative, a quality he brings to his concerts (at least the few times I've seen him). Although he began his career as a Christian musician identified as an evangelical, he entered the Catholic Church while still in his twenties and went on to found a semi-monastic community, the Brothers and Sisters of Charity, where - in the tradition of the old Celtic monasteries - a mixed community of celibates, singles and marrieds live together in an intentional faith community.

All of this is detailed in The Ancient Path, for this is not just a book about the Fathers of the Church - the "new life today" in the subtitle matters just as much as the "old lessons from the Church Fathers."  Granted, the Church Fathers - the group of early Catholic/Orthodox theologians and saints whose writings helped to shape the depth and beauty of Christian doctrine and dogma - are central to how this narrative is organized; Talbot's co-author, Mike Aquilina, is known for The Fathers of the Church, a book written for a popular/non-academic audience. But this is no dry treatise on long-dead saints. Following the general format of James Martin's fabulous book My Life with the Saints, The Ancient Path introduces the reader to significant figures and themes of the Church Fathers through how their wisdom shaped Talbot's life journey.

So over the course of this book the reader is introduced to the earliest post-New Testament figures (like Clement of Rome and Ignatius of Antioch) through to the first mystics (Clement of Alexandria and Origen) through the age of the great church councils, to the life and ministry of some of the best-known ancient figures, like Augustine of Hippo and Gregory the Great. Talbot and Aquilina consider John of Damascus, who died in 749, to be the last of the fathers (as a Lay Cistercian, naturally I disagree - St. Bernard of Clairvaux has long been considered "the Last of the Fathers"! But we'll let that go). Yet even more important than introducing readers to names and dates, The Ancient Path invites us to consider key themes in the writings of the Fathers, from theology to church governance to sacramental spirituality. These themes are presented always in the context of Talbot's own life journey, showing how the wisdom of the past is relevant to the challenges and issues surrounding life here in the twenty-first century. 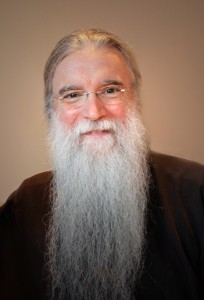 As another adult convert to Catholicism, I particularly enjoyed Talbot's story of his own conversion, including disillusionment that began with the writings of the renowned evangelical philosopher Francis Schaeffer, and culminating in the lovely witness of a Franciscan friar, Father Martin, who mentored Talbot as he embraced not only Catholicism but a contemplative approach to spirituality. Like many converts to Catholicism (at least, like me), for Talbot entry into the Church marked a period of falling in love with the rich tradition of the faith, including the witness of the Fathers. That obvious love shines through the book, and gives it much of its appeal.

He goes on to discuss a variety of topics related to the teaching of the Church Fathers, including salvation, community, prayer, liturgy, church hierarchy, and care for the poor. Some sections of this book work better than others. Critics have suggested that Thomas Merton's writing was the weakest when he was trying to simply be a spokesperson for Catholic teaching, rather than wrestling with the issues or conflicts of lift that mattered most to him. Something of the same dynamic is at work in The Ancient Path. At times, the narrative comes across as little more than a rather uninspired exercise in basic Catholic apologetics (perhaps aimed at the many fans of Talbot's music who may not share his loyalty to Catholicism).

Even the chapter on "Stewardship of the Earth" ultimately disappointed me - by not including later figures like St. Hildegard of Bingen or St. Francis of Assisi, Talbot is left admitting that the bulk of the Fathers' writings simply do not address questions of caring for the earth, simply because those issues were not part of the ancient church's concern. He does suggest that the Father's criticism of sins like avarice and gluttony can indirectly help us to find a better relationship with the earth today, which is true enough. But if he had only allowed himself a broader definition of "Fathers" it would have made for a much stronger chapter. Hildegard, especially, has much to say about our relationship with the earth. Of course, she is a woman, so perhaps including her would throw the entire notion of "Church Fathers" into disarray!

So I think this is a book that pulls its punches and ultimately settles for being a gentle and non-controversial reading of the Church Fathers, suggesting that they can provide inspiration to Christians today, especially those who opt for a conservative Catholic faith. Fans of John Michael Talbot will enjoy it for the glimpse it provides into his own heart, but I'm not sure that it achieves its goal of commending the Fathers as essential guides for our generation. I'm not saying that it undermines that goal in any way. But it doesn't really close the sale.