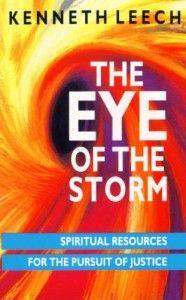 When I met the Anglican writer Kenneth Leech, who is one of my heroes, he told me a funny but sad story.

I mentioned to him that one of my favorite books of his was The Eye of the Storm: Spiritual Resources for the Pursuit of Justice. I loved it (and still do) because it is an eloquent statement of why Christian spirituality necessarily includes a commitment to making the world a more peaceful and just place. He explained to me how he was inspired to write the book.

At some point in the 1980s Leech was on a speaking tour in America and came to one of the Episcopal seminaries, where he was asked to deliver a talk on racism in the church. It's a topic he was intimately familiar with, being a long-time resident of London's east end, where racism too often defined how poor whites and immigrants interacted. In fact, for many years Leech was the Race Relations Officer for the Church of England. After the talk, one of the seminarians came  up to him to express his gratitude, and then said something surprising. "When I first heard that Kenneth Leech was coming to the seminary, I thought it would be the other Kenneth Leech." "The other one?" Leech asked in surprise. "You know," the seminarian said, "the one who writes books about spirituality." At the time, Leech's reputation in America rested mainly on books about spiritual direction (Soul Friend) or spiritual theology (Experiencing God).

Leech told me that he found it very sad that a seminary student would assume that someone who is an authority on spirituality would, by definition, not also be an activist (and vice versa). And so Leech was inspired to write what was the first of several books exploring the relationship between intimacy with God and compassionate commitment to create a more just and sustainable world.

I heard this story before I got married, so it was before 1993. Yet it made a lasting impression on me, and it came to mind recently when I was honored by the following tweet.

You see, this tweet humbled me, because my approach is different from Kenneth Leech. I write about spirituality, but tend to keep my mouth shut when it comes to questions of peace and justice. Not because I don't have strong views - indeed I do. But I remain silent for two reasons. First, because the political conversation online is toxic. It generates more heat than light. I've watched other "spiritual" bloggers get lost in the swamp of their political views (and the attacks of their opponents).

Maybe it sounds like I'm being selfish. But my hesitation to get political in my writing isn't ultimately about me. And this leads to my second reason for remaining silent: which is my belief that spirituality - prayer, meditation and contemplation - is for everyone, not just people who agree with me politically.

Put another way: in a democratic society, we are going to have competing ideas. I believe the best type of government is a democracy, so by definition I recognize that not everyone will agree with me politically. I believe democracy will work better if people on all sides of a political issue are actively fostering a mature spiritual life. Out of that belief, I do not want to limit my message about spirituality because of a reputation for promoting only one type of politics.

Spirituality is about fostering community, bringing people together, and working for reconciliation. But it seems to me that so much of the political conversation happening online is about separating people, dividing them into camps, whether "liberal" or "conservative," "progressive" or "traditional," and of course, entrenched in the support or opposition of any of a number of hot-button issues: guns, immigration, health care, religious freedom, food production. Not to mention important concerns related to race, gender, sexual orientation, or the distribution of wealth.

Yes, I have very strong views on each of these issues. And my views are intimately embedded in my spiritual life. But I am also humble enough to recognize that, at least some of the time, my views could be wrong.  And that, I suppose, is what really bothers me about the political discourse online. It seems to me that a lot of people keep shouting at each other "you're wrong!" without stopping to consider that maybe they are the ones in error. And it's not just online, either - this kind of rhetoric flourishes on the radio and television as well.

And even if we want to avoid using right/wrong language, perhaps humility is necessary to remember that in democracy, competing views might be very complex and nuanced, with a little bit of "what's best" and "what's not quite as good" sprinkled across both sides.

So I am honored that Bec Cranford tags me for how I "rock justice and spirituality" - because, like my hero Kenneth Leech, I am convinced that authentic spirituality necessarily involves a commitment to justice. But I don't think everyone who is committed to justice has to get mired in debate in an environment that fosters toxic conversation rather than a true dialogue and respectful discourse.

Spirituality is like breathing in, and justice is like breathing out. We cannot do one without the other. If we do not receive the vivifying air of God's Spirit, we do not get nourished. And if we do not release that air back into the atmosphere, we become stagnant. Even the monks I know, committed to a deeply contemplative, cloistered life, still operate a food bank once a week: a quiet way in which they demonstrate their solidarity with those in economic need. You must breathe in to breathe out, and you must breathe out to breathe in.

I have a clear sense that my ministry is about breathing in; therefore, I have consciously chosen to remain silent about breathing out. It's not because I consider such conversations unimportant (I admire the bloggers and pundits who take on the hot-button issues, even though it means they are at the front line of the unfriendly character of our public political conversation). Conversations about justice, and peace, and freedom, and morality, are essential conversations. But I also recognize that people are at different places on their journey. And someone who presently is not very justice-oriented in their political thinking might feel a call to become more spiritual. I trust that if they follow that call, they will soon realize that their political values need adjusting. Indeed, authentic spirituality might be their best hope for growing not only in their faith but in their moral and political values. And I do not want my work promoting the spiritual life to be compromised by my getting mired in a partisan conversation that helps no one. 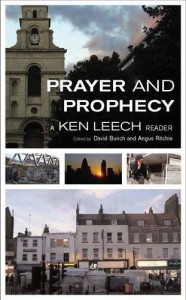 So when you read my blog, whether here, at Patheos, or on my personal website (www.carlmccolman.com), I hope you will keep in mind that I'm only covering the in-breath. Hopefully I'll do a really good job covering it, but it's up to you to consider how the in-breath (your growth in spirituality) will impact and shape your out-breath (your commitment to building a better and more just world). Whatever issues matter to you the most, or however you identify yourself politically, remember this: to rock the spiritual life, you must also rock justice. You can't have one without the other.

N.B. If you want to get to know the wonderful writing of Kenneth Leech, click on any of the book links in the post, or start with Prayer and Prophecy: The Essential Kenneth Leech.