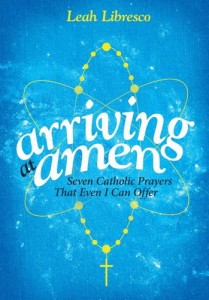 Like so many folks in the blogosphere, I was fascinated by the story of Leah Libresco, atheist blogger who in 2012  surprised all sorts of folks by converting to Catholicism. I haven't been a regular follower of her blog, either before or after she entered the Church, but the few times I've checked it out her writing struck me as articulate, intelligent and thoughtful.

So when Libresco's first book, Arriving at Amen was published, I jumped at the chance to review it. And I'm happy to say that, for the most part, the book delighted me with its candor, quirkiness, and unusual approach to its topic. As a young woman raised in a secular environment, Libresco's work is refreshingly free of the kind of pious language and kum-ba-yah feel-goodery that can make spiritual or religious writing dull or insufferably introspective.

Arriving at Amen, by contrast, is clever, quirky, and fresh with insight. She draws from both the arts and the sciences (a math puzzle one minute, William Shakespeare the next) to illustrate her thinking. For this reason alone, this is a book I can recommend to many people - even though it does have one significant flaw.

Instead of providing a straight-up memoir of the author's conversion (aside from a tantalizing introduction in which she recounts her dramatic moment of accepting the existence of God), Arriving at Amen explores her new-found faith by taking a tour through "Seven Catholic Prayers that Even I Can Offer" as the subtitle puts it. The seven prayers are petition, Reconciliation, the examen, the Rosary, the Divine Office, lectio divina, and the Mass. Obviously, I'm disappointed that contemplation didn't get its own chapter, although it does briefly show up in the lectio chapter - but more on that in a minute.

Like I said, she dishes up a fresh perspective in pretty much every chapter. Struggling to understand petition, she turns to literature to make sense of how those she prays for are the "protagonists in their own stories." Applying her cool logical mind to the confessional, she notes how cognitive bias can undermine that sacrament of mercy. She embraces the fullness of the examen as a daily devotion to facilitate what monks call conversatio morum, or ongoing conversion/fidelity to the life of faith.

Perhaps the most brilliant chapter in this book is the one examining the Liturgy of the Hours, where Libresco's keen mathematical mind acknowledges how this prayer unites us with others, not only across space but across time as well. It is perhaps the most cogent and thrilling explanation of the spirituality of the Divine Office that I have ever read, and something that I look forward to sharing with the Lay Cistercians I teach. It's also encouraging to see that I'm not the only person who relies on theDivine Office App to pray the Liturgy!

Where the book makes a misstep - and, alas, a significant misstep - is with lectio divina, or "sacred reading." Libresco never says she's spent time in a monastery, and I suspect her lack of exposure to the Benedictines or Cistercians may have contributed to her poor understanding of this discipline. The first warning sign comes when she speculates that the four stages of lectio: reading scripture, meditation, prayer, and contemplation, "were arranged in order of increasing difficulty." Of course, she's speaking subjectively, but I would argue that this process is designed to move out of difficulty so that each subsequent stage of the practice requires less effort.

She then launches into a sustained discussion of the problems related to language and meaning in reading the Bible, which is quite interesting in its own way but seems to totally miss the point of lectio, which is to surrender our need to study or analyze the text and instead read it for the purpose of seeking greater intimacy with God. I'm reminded of Sheldon in "The Big Bang Theory," the brilliant scientist who is awkward and clumsy when it comes to dating. Lectio divina requires less Sheldon and more Penny: the emphasis is not on head-smarts, but on the heart. It's not about thinking about God, it's about loving God and being loved by God.

Libresco admits, "Studying scripture through lectio divina is like a moral vocabulary drill." What she doesn't seem to understand is that lectio is something very different from study. Indeed, I wish she had just called the chapter "Bible Study" - it would have made a lot more sense, and been more consistent with what she's actually talking about.

Her mis-handling of lectio culminates in the fact that she hardly mentions contemplation at all, even though it is the splendid end to which the entire practice of lectio divina points. And when she does mention it, she gets it wrong: "Lectio divina culminates in contemplatio because all study of Christ is ultimately directed toward the imitation of Christ." As important as the imitation of Christ may be, it's not what contemplation is about. Contemplation is about intimacy with Christ, something that reading the Cistercian fathers - or, for that matter, Michael Casey - would reveal.

Some people may think I'm nitpicking here. The larger point is not merely that Libresco's book deserves only four stars instead of five, but that it illustrates just how illiterate most Catholics (indeed, most Christians) are when it comes to contemplative prayer. Frankly, the real blame goes to her editor, who should have known better. Libresco is a recent convert, after all. But it saddens me to think that some people will get a bad idea of what monastic prayer is, when they read this misbegotten chapter in an otherwise worthy book.

From Carl's blog, A Contemplative Faith, at Patheos.com