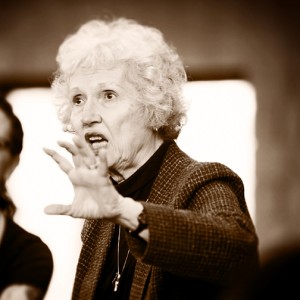 September 2015 has turned out to be a rough month, at least for awesome Anglican writers. First Kenneth Leech passed away on the 12th, and just ten days later Phyllis Tickle followed him into the silence of eternity.

That's two authors I considered role models, both of whom warmly supported my own work. In fact, my forthcoming book Befriending Silence will feature an endorsement from Phyllis - the third time she offered praise for something I had written.

I feel like one of the elves in Middle-Earth during Frodo's life. It's the end of an age, and great heroes (and heroines) are departing this world.

I met Phyllis Tickle in 1997 at a book industry trade show. Over the next 18 years I never got to know her, but our paths would cross from time to time. From the first time I heard her speak, I was hooked. Her books were excellent, but her skill as a speaker was even better, mainly because she would have the audience laughing so hard that I would end up crying and my side hurting.

Although she had made a name for herself as the religion editor for Publishers Weekly and then as the author of a series of perceptive books about religion and spirituality in America today, it was in the last decade of her life that she became the merry dowager of the "emerging church" movement, with books like The Great Emergence and Emergence Christianity detailing her sense that Christianity was on the verge of a transition to rival the Protestant Reformation of 500 years ago.

Indeed, her only semi-facetious pronouncement that the church holds a "rummage sale every five hundred years" became emblematic of her work, both reporting on, but also encouraging, the roiling ferment that marks much of institutional Christianity today. 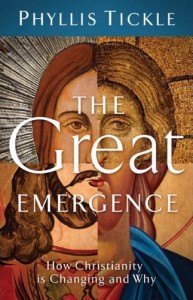 Others, who knew Phyllis better than I, have written lovely and meaningful encomia for her (see this moving piece by Jana Riess), so I will honor Phyllis by noting five lessons I learned from her, not as her friend but as someone who sat in her audiences and read her books and admired her unique presence in the religious landscape of our day.

Rest in peace, Phyllis Tickle. Thanks for your support, your insight, and your laughter. I'll listen for your laughter in the singing silence.

See more on Phyllis Tickle on Day1.org here, including transcripts for her three Day1 programs from 2002.