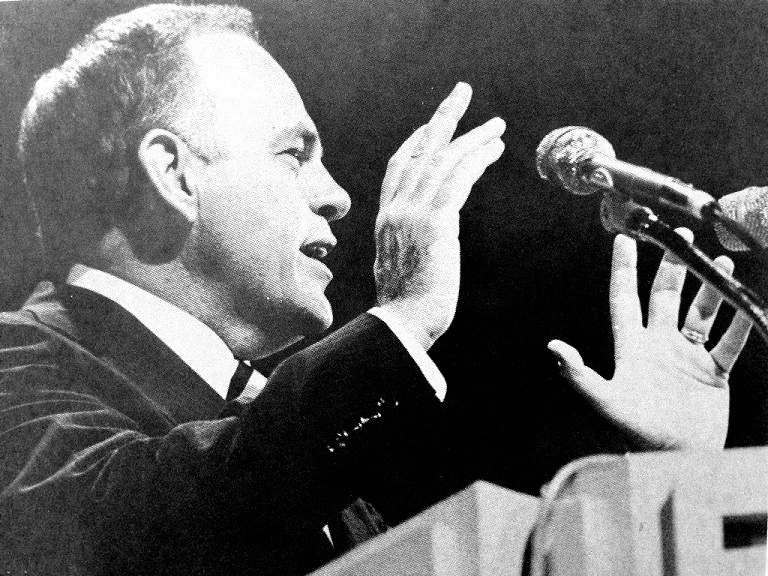 Aside from my father, no man has had a more lasting impact on my spiritual life than Bill Self, who baptized me, who was to me in my youth the very image of God.

He died on January 9 from complications of Lou Gehrig's Disease.

I knew him as Dr. Self. He pastored Wieuca Road Baptist Church in Atlanta from 1964 to 1990, and therefore was the only pastor I knew from the day I was born until I graduated from college. The picture above was taken from Wieuca's 1981 membership directory and shows him as I remember him - in a suit, behind a microphone, relaxed, in control, bringing the Word.

Wieuca's numbers surged in those years - the cavernous sanctuary was filled three times every Sunday; the youth choir had 100+ members; the campus was abuzz every Wednesday night. The church was a city unto itself. Therefore to a child Dr. Self was larger than life. I remember visiting his office once around the time of my baptism and I was awed by the place - it was the Oval Office as far as I was concerned - but was put at ease by his kindness and the way he would look right at me when he spoke.

I appreciate his sense of humor now more than I did in those years. Once in a sermon he mentioned something he had seen on TV. But, he said, he had not actually been watching TV - instead he had been "walking through the living room and the TV happened to be on." Also, this recurring line, when discussing his thought life on some topic or another: "And I said to myself, Self..." He pulled that one out every couple years, and it was always perfectly timed.

Dr. Self was not a fire and brimstone man but he was very expressive. Even when he was quiet he got your attention. He meant what he preached and yes, he got riled up sometimes. But his zeal was always governed by gentleness and his sermons always ended in hope and with a restful word.

What I learned from him is that life and faith and God are matters of great importance, urgency even. Through childhood, adolescence, and early adulthood, year after year, sitting in the pew at Wieuca, I came to feel the weight of God.

That weight was no burden. God was community and hope and security in years when I needed these things like water. Dr. Self knew how to sow stillness and peace in a frenzied soul. In Stars Beneath Us I share the following:

[When I was about 10] I was sitting with my family in a pew near the front of the sanctuary. The evening service was drawing to a close. William Self, our pastor, stood in the pulpit above us. The lights had been extinguished save one or two filtered spots that shone on him and made the scene appear airbrushed and gauzy in a very 1970's kind of way. The organ softly exhaled stanza after stanza of Turn Your Eyes Upon Jesus.

I knew what would happen next because it had happened every Sunday night for as long as I could remember. And every time it had struck true. Its power was in the way it marked the week's passage with gentleness and hope:

Without a trace of hurry Dr. Self reached out and grasped the edges of the large pulpit. He tipped himself forward, smiled, and scanned the congregation. Back and forth. It was very dramatic. Then he rocked back on his heels, paused, and said what he always said:

He then executed the remainder of the formula: A theological, item-by-item analysis of why that particular day had been a good one. It lasted no more than five minutes and was capped off by that most revered of Baptist traditions, the invitation. It all added up to a single undeniable message: We could be at peace. We had made it through another week and were once again safe in God's great house.

It's been, for William Self, a good life, lived out in faith and hope and steadfastness before God and his fellows.

Thanks be to God for the message and life of Dr. Self, my pastor.