This is an excerpt from Dr. Marcia McFee’s new book [Think Like a Filmmaker Â© Marcia McFee, 2016]. Find out more HERE. 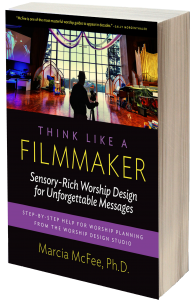 As long as we’ve been humans, we’ve been telling stories. The ancients even recorded their stories on the world around them, etching and painting the earth’s surface with their symbols. We lived among our own stories, and the images embedded in them came alive as we used them to make sense of our place in the world””sharing information, preserving memories, and expressing dreams, beliefs, and fears. We spoke, sang, painted, acted and danced our stories. We used all of our senses in order to create indelible memories so that the stories would be repeated and handed down through the ages.

“Story is everything,” says documentary filmmaker Abigail Wright. “We are hardwired to understand stories. What are stories? They are sequences of events that help us to understand the tidal wave of sensations that come to us. They put order into our world. They tell us what to do, who we are, where we come from. Is there justice in the world? How do we die? All the important things of our life” (Abigail Wright from her lecture “Think Like a Filmmaker”, https://vimeo.com/134990548). As humans began to seek deeper meaning about their world, their stories took on another role, communicating messages that could bind together, connecting people to each other and all the mystery of existence.

Those of us who design worship have the same task as our ancient ancestors. We must call on all of the senses through every expressive medium we have at our disposal. The stories handed down to us through our sacred texts come alive when we do. Our goal is to tell the most amazing Story””and the stories that point to that liberating message””in the most compelling ways that invite people to live with hope and conviction for the “good news” that we share.

But more than simply being story-tellers, we are invited to create an experience of the story””to invite the congregation to be “story-dwellers” (turn of phrase by Rob Webber in Visual Leadership: The Church Leader as ImageSmith, 2002). Audiences were once encouraged to “listen-from-afar,” putting distance between themselves and the message they heard. Whether delivered in the lecture hall, beamed to radio and TV towers, or spoken from the pulpit, the message was something happening out in the world that the hearer could think on and evaluate without actively participating in. Things are different now. Communication styles have changed as audiences crave the opportunity to learn by experience. People now want to be immersed in the messages they receive rather than merely hear them.

Jon Boorstin, author of Making Movies Work, says filmmakers know that “people don’t just want to watch a movie, they throw themselves into the experience””they want to lose themselves in what they’re seeing.” (Jon Boorstin, Making Movies Work, p. 8). Director Stephen Spielberg tells the story of losing himself in his first movie-going experience as young child. His father told him he was going to take him to “the greatest show on earth” and described the lion tamers and circus acts. Spielberg was ecstatic and waited the week out with anticipation. The day of the show, they stood in a very long line next to a red wall. Why weren’t they seeing a tent, he wondered?

“Finally we walked into a dimly lit room… and the ceiling looked like a church. It felt like a place of worship. The curtain opened and the lights went down. A dimly lit image came on the screen and suddenly I realized my father had lied to me, had betrayed me and we were not going to see a circus, we were going to see a movie about a circus. I had never seen a movie before. The feeling of disappointment and regret and betrayal lasted only about 10 minutes and then I became another victim of this tremendous drug called cinema. And I was no longer in a theater, in a seat, I wasn’t aware of my surroundings, I was no longer in a church–it was a place of equal devotion and worship, however. I became part of an experience.” (Academy of Achievement, https://www.youtube.com/watch?v=kBN9jpooZoM)

When worship acts more like a meeting agenda of items to be completed with little attention to the flow of the story-telling endeavor, it loses its power to move us. We keep our distance from the story, from our story””observers of the trappings of ritual rather than participants in an unfolding journey of discovery. Becoming immersed in a story means that we allow ourselves, for a while, to suspend the minutia of our lives and take a step back to examine and reflect on the bigger picture””how we are living our lives, the choices we make, and how we relate to God and to each other. To be immersed is to allow a holistic engagement of cognition and emotion and physiological response. It puts us in touch with the depths of our selves, what we think and feel. It puts us in relationship with our companions on the journey through shared experience. Religion, after all, is derived from a Latin root meaning to bind together. And as we allow ourselves to slip into time-out-of-time, we are so bound, closer to each other and to the divine.

How much more could we invite people into deep theological reflection about our narratives of faith by immersing ourselves in the sights, sounds, color and drama of the message? How can such sensory-rich storytelling invite more participatory worship? In this book, we will learn how all of the worship art forms can contribute to the story-telling endeavor, making sure that every element of worship moves us toward the expression of unforgettable messages.

_What are some moments we’ve experienced in worship that stand out to us as meaningful and memorable? Why were these moments so important to us?

Why are stories such powerful tools for bringing people together for a shared human experience?_**

Stay tuned for next week’s post, in which I’ll be talking about the connections we can find between members of a film production team and members of a worship design team. If you’d like to learn more about Think Like a Filmmaker, sign up HERE to receive news and updates about the book’s release!