Recently my wife and I went with some 19,000 other folks to hear Hillsong United, the Australia praise band famous for their song "Oceans," which is the closest thing I've ever heard to an actual contemplative piece of contemporary Christian music. It was quite the extravaganza: over two hours of praise music, the songs punctuated by earnest mini-sermons from the various band members on the necessity of forming or reaffirming an intimate relationship with Jesus, who loves us and wants to heal us and is the only hope for our divided world.

It was a good concert. Vocalist Taya Smith, the worship leader on "Oceans" and several other songs, especially shone with a commanding voice that would fit in with the best Gospel choir. The music alternated between rousing stadium-rock-anthems and more reflective, worshipful pieces. The light show was a psychedelic feast.

As a Catholic, I found both the song lyrics (helpfully projected onto giant screens either side of the stage) and the testimonials to be generic enough: God loves us and wants a relationship with us, Jesus died for us, now is the time to make a decision to follow Jesus, that sort of thing. When the band's leader, Joel Houston, pulled an embarrassed-looking young man out of the audience to participate in a "communion service" (with the audience "joining in" with their cellphones), I just kept Matthew 7:1 in mind. And when Houston led the audience in a prayer to start or deepen that all-important personal relationship with Jesus, I simply changed all the "me" language to "us" language, reflecting my catholic faith that salvation happens in community.

Back home after the show, I decided to learn a bit more about Hillsong Church, based in Sydney Australia (and pastored by Joel Houston's father). Hillsong is part of Australia's equivalent to the USA's Assemblies of God denomination, making it an evangelical/pentecostal church; no surprise there. But several websites I visited suggested that Hillsong's theology places it in the "prosperity gospel" movement. In case you're not familiar with it, the prosperity gospel (propounded by celebrity pastors past and present like Oral Roberts and Joel Osteen) proclaims that God wants faithful Christians to enjoy health and wealth: material wellness and financial success. As such, it is a flavor of religion which stresses positive thinking and a connection between "faith" and receiving God's promises of material abundance. 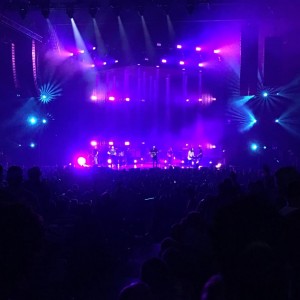 Well, I don't know if Hillsong (the church or the band) are prosperity gospel believers or not, and frankly I'm not worried about it one way or the other. But the notion of the prosperity gospel has fascinated me for some time. I've seen it as a peculiarly American heresy, so it's interesting to think that it is showing up in other parts of the world. Interesting, but not surprising, since after all America's heady mix of liberal democracy and aggressive capitalism has its own global appeal, rightly or wrongly.

But what occurred to me (and here is the point of this entire post) is that St. Benedict is probably the best antidote to the prosperity gospel.

Let's start with points of agreement. Does God love us unconditionally? Absolutely. Does God want what's best for us? Certainly.

Does that include physical health and material prosperity? Well, in a world untainted by sin, I would say yes, that's God's plan for us. But are world is sinful. So right away we have to do a bit of spiritual triage here.

If everyone on the earth were as wealthy as even the average American, we would chew through the planet's resources in short order. I'm no expert, but an infographic online suggests that if all the world lived as Americans, we would need four times the resources currently available to us, planet-wide, to keep up with the demand.

I don't think the prosperity gospel has a plan for finding us three or four more planets to consume.

So if God loves us and wants what's best for us, but has not provided the resources to sustain a USA-level of consumption for everyone on earth, then what is the path to a truly Godly prosperity?

I believe St. Benedict has the answer. In his Holy Rule for Monasteries, St. Benedict suggests that a prayerful life, lived in community, marked by hospitality, with an emphasis on silence, reading, fellowship, and labor, is in fact the good life.

Indeed, the motto for Benedictine monastics is ora et labora - Latin for "prayer and work." Prayer and work are the keys to a happy life (don't you love how in the Latin, "prayer" -  _ora - is actually part of "work" - __ labora_?).

By contrast, the prosperity gospel seems to uncritically accept the American way of life, which is based not on prayer and labor, but on entertainment and consumption. It's a narcissistic way of life, which emphasizes not what I do for God (prayer) or for others (work), but rather focusses on what I consume, whether in terms of material goods or experiential amusement.

The wisdom of Saint Benedict, and of his monastic disciples down the centuries, is crystal clear: a life grounded in prayer and service is not only a good life, but it is a happy life. By contrast, American consumerism seems to continually foster avarice, greed, gluttony, and ultimately depression and despair. That's because for consumers, it's never enough: there's always something newer, bigger, better, flashier, faster, louder, more exciting, sexier, etc. etc. to consume. And because the newer/better/faster is always pricier, we have to keep working - not the holistic labor of a monk tending the garden, but the mind-numbing tedium of so many post-industrial jobs. So it becomes a vicious cycle: we're so miserable at work, that we have to keep on consuming and entertaining ourselves, just to gear up for next week's 50 more hours of soul-sucking boredom.

Now, I suppose many people would say they love their work and derive great satisfaction from it. But part of our national myth is that work is boring, if not soul-destroying (think of movies like Clerks or The Man in the Grey Flannel Suit, or, for that matter, Dilbert). So unlike the Benedictine ora et labora, the motto for the American way of life seems to be noli ora et non ex tristitia labora - "don't pray, and work begrudgingly" (with apologies to my High School Latin teacher, Miss Ball, for what I am sure is a butchery of the language).

At its heart, what's wrong with the prosperity gospel is that it focuses on ends, rather than on means. It wants to reduce God to a Santa Claus figure, who bestows riches on those who ask in faith. But Benedict would say "forget about wealth, and focus on what will truly make you happy: meaningful relationships, good honest work, and a life drenched in silence and prayer." Do that long enough, and you'll stop worrying about how big your house or your stock portfolio is. Not because those things don't matter, but because they don't ultimately matter.