Friends, 2017 is shaping up to be the year of Celtic spirituality for me. I hope you'll join me in exploring this lovely dimension of Christian wisdom.

What, exactly, is Celtic Christianity? Sure, it's the spirituality found in books like John O'Donohue's Anam Cara or Esther de Waal's Every Earthly Blessing, among many others. But still: what is it?

The easiest answer to this question is: the distinctive spirituality of the Celtic peoples, which includes the people of Ireland, Scotland, Wales, Cornwall, the Isle of Man, Brittany, and Galicia (in northwest Spain). All these lands have vibrant cultures that originate with the Celtic peoples of old, and all except for Galicia have a heritage of Celtic languages, such as Irish, Scots Gaelic, or Welsh. 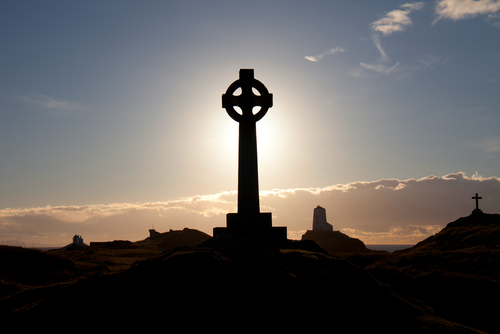 But what makes Celtic Christianity so, well, Celtic? To answer that question takes a bit of historical sleuthing.

The faith of Jesus came to the Celtic lands in the first centuries of the Christian era. That in itself is not terribly remarkable, except for the fact that the Celtic lands, for the most part, never submitted to Roman rule. So Christianity in Ireland or Scotland developed its own culture - its own spirituality and world-view - that in some significant ways were very much unlike the mainstream religiosity of the empire. So even from its early days, Christianity in Wales or Ireland had a different feel than, say, the religious expression one might have found in Greece or Italy or Syria.

The Elements of Celtic Spirituality

These differences are subtle, but they include a deep appreciation for creation, a sense of harmony of nature, a vibrant sense of God's mystical presence, and a rich appreciation for stories and myths as conduits of wisdom.

Of course, the twists and turns of history meant that the spirituality of Celtic people sooner or later became merged in various ways with other mainstream expressions of the faith. By our day, the average Christian of Ireland or Scotland likely just sees himself or herself as a good Catholic or a good Presbyterian.

There is no institutional or organizational form of "Celtic Christianity" - it is simply a spiritual or cultural expression of faith, with ancient roots that can be surprisingly meaningful today.

So why is 2017 shaping up to be the year of Celtic Christianity for me?

To begin with, I'm writing a book on the topic, that is tentatively to be called The Little Book of Celtic Wisdom. It should be published sometime in 2018 or 2019, so stay tuned.

But while I'm writing the book, I'm also preparing a number of events and programs in which I invite you to explore Celtic spirituality and wisdom with me.

I have a request for you

In writing my book about Celtic Christian spirituality, I'm naturally going to be looking at legendary saints like St. Brigid or St. Brendan, at the poetry and folklore and legends of the ancient Celts, and at distinctive practices like the veneration of holy wells and the recognition that certain sacred sites are "thin places" - where the veil between earth and heaven are especially thin.

But I'd also like to hear from you, whether you are a regular reader of this blog or someone who just happened to stop by.

Please take a few moments and reflect on these questions; if you have any questions or comments, please post them in a comment here. And thank you!