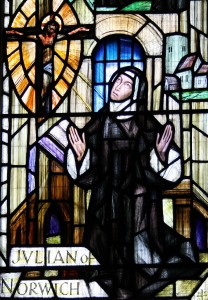 Julian of Norwich, the author of Revelations of Divine Love, had a series of visions on May 8, 1373. Or maybe May 13, we're not entirely sure.[1] Nevertheless, today is a day that people around the world honor as a memorial of Julian's extraordinary encounter with Divine Love.

And it was 33 years ago on this date - May 8, 1984 - that I attended a one-woman play about Julian of Norwich, at the National Cathedral in Washington, DC. I went to that play because I was interested in Julian; but thanks to going to that one event, I was introduced to an entire world of contemporary Christian spirituality.

The play was Julian, by J. Janda, performed by Roberta Nobleman, and it explored Julian's life, theology, and even her ministry as a spiritual director, alluding to her relationship with a younger mystic, Margery Kempe. I was a  young lad of 23 at the time, still in graduate school, and knew about Julian mainly from reading about her in Evelyn Underhill's Mysticism: A Study in the Nature and Development of Spiritual Consciousness. I wouldn't have even known about the play, but my girlfriend at the time (who was entirely uninterested in the mystics) was reading The Washington Post one Sunday morning and looked up at me and said, "there's going to be a play at the Cathedral about one of those mystics you like." She showed me the announcement, and sure enough, it looked like something I wanted to attend. 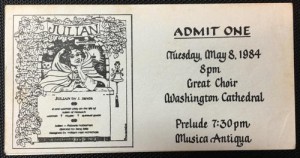 My ticket to see the play

I called the Cathedral and they told me tickets were free, but I should get them in advance. So on the Saturday before the play, I went into town - no easy feat in those days, as I had no car; I had to catch a bus from my home in suburban Fairfax, VA to Arlington where I caught the subway to the Cleveland Park Metro Station, before walking a mile to the Cathedral. Fortunately it was a glorious spring day, and there was some sort of gardening or flower festival taking place on the Cathedral Close, so the atmosphere was truly festive as I walked up, found the tickets (in the gift shop I believe, where I probably spent too much money loading myself up with books), and proceeded to fall in love with that grand 20th century Gothic edifice - a romance that has survived my various spiritual wanderings over the years, including my conversion to Catholicism in midlife. 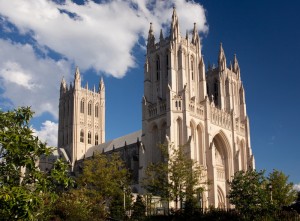 Back at the Cathedral the following Tuesday - the evening of the 8th - in the so-called "Great Choir" or nave of the Cathedral, a small but appreciative audience was treated to a short concert of medieval music before Ms. Nobleman took the stage. As she delivered her performance, based much on Julian's own words, in fourteenth century dress there in a dark cathedral nave, a sense of timelessness washed over me and I felt caught up in the wonder of Lady Julian's visions - even though I had not yet read her book for myself.

After the play, I saw a table set up behind the audience, where an organization called the Shalem Institute was handing out information. Shalem was one of the co-sponsors of the evening's play, along with the Cathedral. I chatted with the woman at the table, and she informed me that Shalem would be hosting a "Julian of Norwich Quiet Day" the following Saturday. Right there on the spot I registered for the event, and wrote a check for the registration fee. Years later I came across the cancelled check; in the memo line I wrote "Julian Seminar." Clearly, I had the mind of a graduate student! And had no idea what a Quiet Day was. 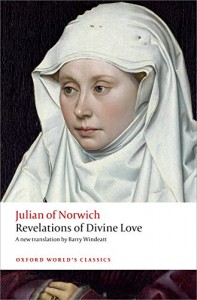 But I found out. I went to Cleveland Park Congregational Church that next Saturday, where thirty or so folks convened to share a day of silence, prayer and reflection, organized around the words and wisdom of Lady Julian. I had never experienced communal silence before. It was a day that changed my life.

I often hear people tell me that they are uncomfortable with silence, they're afraid of it, they don't know what to do with it. I must be a lucky man - for when I first encountered intentional silence in a communal setting, on that spring day in 1984, I took to it like a duck to water, pardon the cliché. My immediate emotional response to having 45 minutes of silence with other people was joy. I don't want to over-romanticize that day - or my relationship with silence in the years that followed; I've certainly logged many moments in silence that have been restless, distracted, or anxious. But that initial encounter was, for me, an opening up: a gateway into a new and larger world. It was a moment of coming home and recognizing who I truly am.

Three years later I would leave Washington DC to move to the deep south, where I have lived ever since. But over that three year period I met and worked with my first spiritual director through Shalem and took several classes there, on deepening my own contemplative practice, and then on forming the skills to lead contemplative prayer groups. Needless to say, those have been foundational skills not only for my daily practice, but for my life's work.

And although my spiritual journey has taken me on many twists and turns and I did not remain intimately connected with Shalem after leaving DC, here in Atlanta I have eventually connected with a number of spiritual directors who are Shalem graduates; indeed, several of us gather every other month or so for mutual support and a nice long serving of communal silence. So after 30 years, Shalem's silence-in-community continues to nurture me.

So on this (likely) anniversary of her visions, my heart is filled with gratitude to the Lady Julian of Norwich. Not only for her wisdom and witness as a mystic of Christ, but also for "introducing" me to Shalem - and to Christian contemplation in general!

[1] Scribes who made the earliest copies of Julian's manuscript listed the date of her revelations as May VIII or May XIII - the manuscripts disagree. Clearly, in one of the earliest manuscripts someone copied a "V" for an "X" (or vice versa) and we are left with a mystery that will probably never be solved.