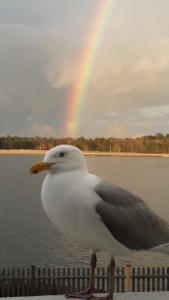 A double rainbow appeared last evening over the tidal river beyond the house where five seminary classmates and our spouses are staying this week on the coast of Maine.

It happened after a full day feasting with our seminary Old Testament professor, Edward F. (Ted) Campbell, Jr. and poet J. Barrie Shepherd on William Greenway's For the Love of All Creatures: the Story of Grace in Genesis in this time of climate departure. The five seminary friends, once seven, who call ourselves "The Old Dogs" or "The Gathering" have convened annually from Texas, Indiana, Illinois, Arizona, and Minnesota for study and fellowship for the past 20 years.

Just moments before the rainbows appeared, we were entertained by two seagulls begging for treats. One of them ate a Pepperidge Farm "goldfish" our of my hand - twice. Snatch! The goldfish was gone. Down the seagull's gullet. My hand was fine.

Then the first rainbow appeared. Followed by another. Almost as beautiful was the reflection of the sun from the yellow grasses on the far shore of the tidal river at the foot of the rainbows. The seagull and the rainbows were like exclamation points to Greenway's case that we are seized by the love of  all  creatures.

"Maybe there really IS a God!" I said to my seminary roommate. "You know there is," Mr. Stewart," said Wayne.

Early this morning at dawn there is a very aggressive seagull incessantly banging on the sliding glass door between my living room chair and the deck demanding more cheddar goldfish!