We live in a moment in history when, finally, our global human family seems to be starting to truly wrestle with the problems associated with systemic oppression - including racism, sexism, classism, and other ways in which we create social distinctions, or limit people's freedom or opportunity, merely on the basis of their identity. There's still much work to be done, but compared to where we were 50 or 100 years ago, it seems like progress is being made, however slowly.

This, I believe, is inspired by the leading of the Holy Spirit, for God is a God of love and justice.

Part of the challenge of dismantling oppression is that it also requires that we dismantle privilege. In other words, we cannot fully address the ways in which certain groups of people have been wronged without also coming to grips with the fact that other groups have benefited from the injustice.

That's what we mean when we talk about privilege - as in white privilege, or male privilege, or heterosexual privilege. Privilege refers to the ways in which social structures benefit some people at the expense of others.

This may be a controversial topic to some, but probably mostly to those who are currently the beneficiaries of this or that dimension of privilege. Part of the nature of social privilege is that it tends to be invisible to those who benefit from it. As a wonderful banner I saw at the Wild Goose Festival so succinctly puts it, "White privilege: if you can't see it, that means you've got it!"

Many of us, though, do see it, and because of our commitment to Christian values, we want a world where privilege no longer hurts those who lack it.

What does this have to do with contemplation?

I have been connected to the Christian contemplative movement in North America for over thirty years now. Over the years, I have seen that many (not all, but many) participants in the contemplative prayer movement tend to be white, educated, and affluent - in other words, people of privilege. That's not across the board, of course, but it's a pattern that I have noticed again and again.

Maybe this is more prevalent because I live in the south, but when I've spoken or led retreats in other parts of the country, it often seems that even there, the same types of folks keep showing up. Folks who, frankly, look and talk like me.

Some of this may have to do with the demographics of Christianity in America. Contemplation seems often to be most warmly embraced either by liberal Protestants - Episcopalians, Methodists, Presbyterians, and so forth - or by progressive Catholics, folks who are familiar with the writings of contemplatives like Thomas Merton, Henri Nouwen, or Richard Rohr. And since mainstream Protestants and liberal Catholics tend to be white, educated, and affluent... well, you get the picture.

It's been said that 11 AM on Sunday morning is the most segregated hour of the week (that's something that all Christians should be praying about - and I suspect these prayers need to be prayers of repentance!). And because the heritage of contemplation comes to us through western European Christianity (many of the great mystics whom I often write about on this blog come from either England, Germany, France or Spain), and then has been accepted primarily by white Christians in North America, then it's no surprise that the Christian contemplative community here in America continues to look very white/European. 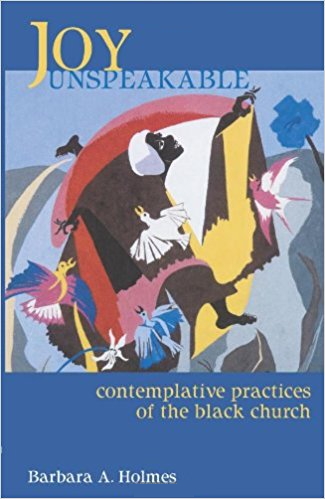 Thankfully, if we look at the history of Christian spirituality as a whole, we can see that there's nothing inherently white or Euro-centric about the mystics or the contemplatives. Great mystics come from Africa, Asia Minor, and the Middle East just as much as they do from Europe (let us never forget that St. Augustine was African), and in our time, Thea Bowman and Howard Thurman are just two examples of contemplatives of color who lived here in America. In recent years, Barbara A. Holmes published a book exploring the contemplative spirituality of African Americans called Joy Unspeakable.

Even though many American contemplatives appear to be persons of privilege, there's an irony at play here: simply this, that to engage in a sustained contemplative practice is likely to make a person more aware that privilege is a problem (maybe that's wishful thinking on my part, but again my experience is that contemplatives tend to be people very much committed to working for greater equality and the dismantling of social oppression).

The problem is not that privileged people are drawn to contemplation. The problem, as I see it, is that the contemplative community has not yet found a way to step beyond its privileged pedigree and become a more truly multi-cultural and diverse community of contemplatives. I don't have a formula for how we can make this happen. But it's on my heart that this is something we should all be praying about, and be in discernment about. So I'm writing this post to invite you to pray and discern with me.

I pray that contemplatives, both individually and communally, will find ways to invite and include people who come from different social backgrounds than themselves - whether that means a different race, a different ethnicity, a different economic background or educational level, or even a different sexual orientation or religious identity.

Reaching out to the "other" can feel scary. And yet, we worship a God who calls us to love our neighbors - all our neighbors. So contemplatives really can do no less.