My wife hates spoilers, that's why she hasn't allowed me to show her one of the better episodes of Star Trek: The Next Generation. The final episode of the greatest television series of my life came to mind when I was geeking out with my friend Katelyn over the series. All Good Things Parts 1 and 2 try to capture the essence of the series that defined television science fiction in the late 1980's and early 1990's.

At the very end of the episode, after all is said and done, Captain Jean Luc Picard finally sits down with his fellow officers at a poker table and begins to play the game of cards that had eluded him for so long. They remind him that he always had a seat at the table and the episode concludes. It reminds me a little of the liturgical end of the year that we will mark this week-Christ the King Sunday. 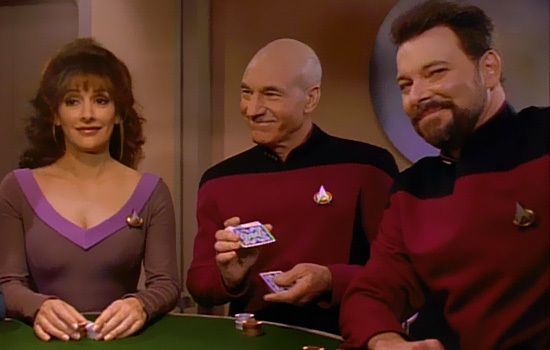 This week, after all is said and done with turkey and stuffing, we will gather in worshipping communities across this country and proclaim that Christ has a seat at the table, and that for us the incarnation is the heart of the Advent journey we are about to embark on. The fact that God would get down and become one of us in the fruition of time and space long ago is the most convincing and convicting act a Deity could take. But God, like the captain of the starship Enterprise chose to be with people instead of above us. God broke down the barrier that separates humankind from God, and that is a great gift.

Christ the King Sunday, Advent, and Christmas, for me these seasonal and liturgical markers are where I learn to believe again. Where I learn that God in God's goodness became like us. The Incarnation allows us to circle around in the liturgical year and enthrone Christ as king of our lives. It allows us to enter into a soteriology of hope instead of fear. We are free to believe in an incarnate Christ instead of a condemning Christ. That's where so many faith leaders get it wrong these days-Christ came not to condemn but to enter into a blessed relationship. God comes and sits at the table with us. That's the goodness of the season, may we crown God as Lord of our lives, as Lord of time and space, and as the hope of the world. Therein we will find new beginnings at the end of the liturgical year. Cheers to the end of this liturgical year, and blessings in the Advent to come.