NOTE: Recently on our Day1 website we featured an interview by David Crumm of ReadTheSpirit.com with Duncan Newcomer, author of the new book 30 Days with Abraham Lincoln: Quiet Fire. Click here to read that piece.

Day1 host and producer Peter Wallace wrote the foreword to that book, and we thought you might like to read it. To order the book from Amazon, click here. 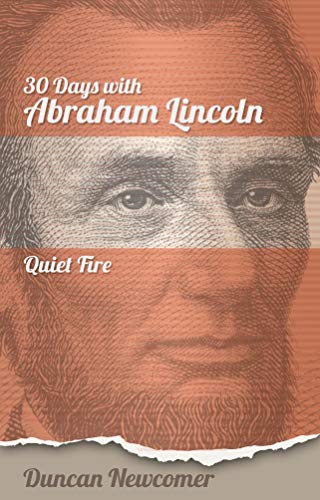 When Father’s Day approached each year when I was young, I knew what I would get my dad: I’d visit a bookstore in search of a new book on Lincoln. One year it was one of many tomes on Lincoln in the Civil War. Another year I gave him Quaker theologian Elton Trueblood’s book, The Spiritual Pilgrimage of Abraham Lincoln. He particularly liked that one.

In his preacher study, my dad kept a life-size bronze bust of Lincoln, which brooded over his shoulder as he prepared sermons. Dad’s library of Lincolniana, collected through the years (and not just from me), was quite sizable; he enjoyed delving into it from time to time.

When I was a teenager in West Virginia, a large bronze sculpture entitled “Abraham Lincoln Walks at Midnight” was installed on the state capitol grounds in 1969. This powerful image had been commissioned to celebrate (though belatedly) the centennial of West Virginia’s statehood. In 1963, in the midst of the Civil War, Lincoln carved my home state’s odd boundary along the Allegheny Mountains from the mother state of Virginia. The statue was criticized at the time, as I recall, because Lincoln appeared so dreadfully melancholy—and hopefully not because of the new state he’d created. But I think it captured Lincoln’s demeanor during that awful time in our history in a graceful, powerful way.

So Abraham Lincoln made a sizable impression on my life from a young age. And not mine only—Lincoln routinely tops all the favorite president polls. There’s good reason for this.

Now, Duncan Newcomer has added to the Lincoln library, and how I wish I could gift this book to my father. He would relish it. I certainly do, and I am confident you will too.
Duncan captures Lincoln’s spirit in every one of these thirty meditations, each spring boarded by a potent quote by Lincoln or someone who knew him. (I love the fact that these began life as radio essays since I am a radio guy as well.)

By reading these sublime and soulful reflections, possessed (as Duncan puts it) by a quiet fire, you will find inspiration and insight that will make sense in your own life, in your own battles with fear and grief, in your own decisions over the best path to take in a certain situation, in your own yearning for deep meaning and purpose.

As an author of spiritual meditations myself, I am thrilled by this first in a new series of “Thirty Days With…” books from Front Edge Publishing. What a powerful concept for today’s readers who are so bombarded by electronic messages of all kinds from all sides: to simply take a few minutes each day to read and ponder and question and enjoy. This book, focusing so winsomely on the spiritual wisdom of the sixteenth president, will help you launch a life-changing practice you will want to continue.

In his introduction Duncan references the “Wide Awakes,” a movement of young men and women who supported Lincoln for president. Today we talk about being “woke” to the needs of our fellow human beings around us. Lincoln remains a powerful guide for us. As Duncan writes, “Lincoln himself certainly was a Wide Awake, awake to the fire within him connected to the fire he believed enlightened America.” Through these meditations, Lincoln’s spirit can continue to inspire us—to keep us “woke.”

In these pages you will occasionally run into the magnificent American poet Walt Whitman, which is fitting indeed. Just recently I read a quotation by Whitman about Lincoln that strikingly captures his essence:

“See how he went his own lonely road, disregarding all the usual ways—refusing the guides, accepting no warnings: just keeping his appointment with himself every time.” [Brenda Wineapple, editor. Walt Whitman Speaks: His Final Thoughts on Life, Writing, Spirituality, and the Promise of America as Told to Horace Traubel (New York: Library of America, 2019) 14.]

I encourage you to keep an appointment with Lincoln as well for thirty days, and watch what might become of your faith, your spirit, your dedication to justice and peace, your purpose.

I believe you will be amazed.