I am an ordained minister and a Harley rider. For those of you who doubt the connection, consider the great hymn “Ride On! Ride On in Majesty.” Or 2 Kings 1:8, which describes the prophet Elijah as a biker: “He was a hairy man with a girdle of leather.”

Sermons are another commonality between ministry and Harleys. For example, the simple act of turning a corner on a motorcycle is rich with life lessons.

There are four stages to any effective turn: slow, look, lean, and roll. First, you slow down in order to stabilize and control the bike. Second, you look around to assess what road hazards might be in your path. Third, you commit to the turn by leaning the bike in the direction you want to go. Finally, you roll on the throttle and accelerate.

These steps work for everything from your organizing your day to changing jobs. But what about more complicated scenarios? Consider the ugly issue of racism. While there is no easy answer to how to turn that corner, we can at least use these steps to start.
In fact, Dr. Martin Luther King, Jr. explained that the four steps in a non-violent campaign were self-purification, investigation, negotiation, and direct action -- not far off our lessons in how to turn a bike.

We begin by slowing ourselves to get control of our own hearts. Many of us white citizens earnestly feel that we aren’t “racist.” However, racism comes in many forms. While some of it is overt, such as the many recent examples we have seen, much of it is so deeply ingrained in our psyches that we don’t realize it’s there. Yet, it impacts our every thought and decision.

Let me ask you this: What if two weeks ago in Minneapolis, a white man had been murdered by a black police officer? And what if that had come after years of similar violent crimes against whites? After generations of your family being discriminated against and denied basic rights and services for being white, endangering your children’s future? How would you feel then? In order to make a turn toward healing racism, we must slow down and get control of our own hearts.

Second, we must look around and educate ourselves about the systemic nature of the problem. Racism is not just a state of mind; it’s part of the fabric of our communities. In fact, it’s like motor oil; once it gets into fabric, it’s next to impossible to get out. People of color have been consistently discriminated against in all aspects of our society, from lending practices and city planning to education, access to healthcare, and our criminal justice system. To begin the turn, we must truly understand what’s in front of us.

The next stage is to lean into and commit to the turn. Here we take a lesson from physics: things won’t move unless something pushes them. On the bike, you have to put pressure on the left or right handlebar to initiate the turn. To address systemic discrimination, you have to commit to a change and DO something. If it’s important to you, you’ll find a way. If not, you’ll find an excuse.

Once we commit, we can begin step four: open the throttle and roll into action. If you don’t hit the gas after leaning into the turn, the bike will go down. True forward movement comes when all the parts of the bike work together, from the spark plugs firing to the cylinders moving the wheels. Similarly, while it’s great to make bold statements and sign pledges, if you stop there, the cause will go down. It will take all of us firing into action to dismantle racism in our country.

There are no easy answers, but we must start somewhere. As we slow ourselves, think, commit, and move forward, let us remember the words of Amos 5:24: “Let judgment roll down as waters, and righteousness as a mighty stream.” Better yet, let’s update those words and pledge this instead: Let justice roll down . . . like a Harley at full throttle. 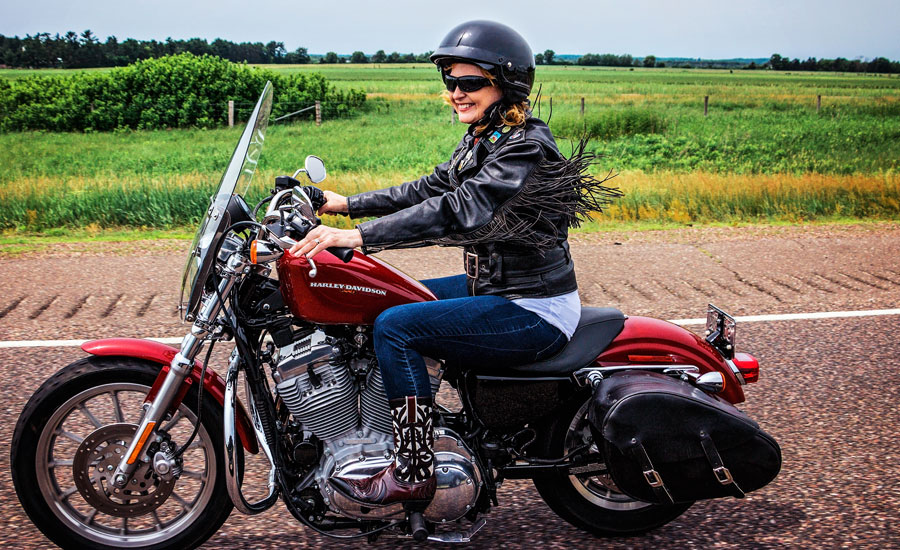