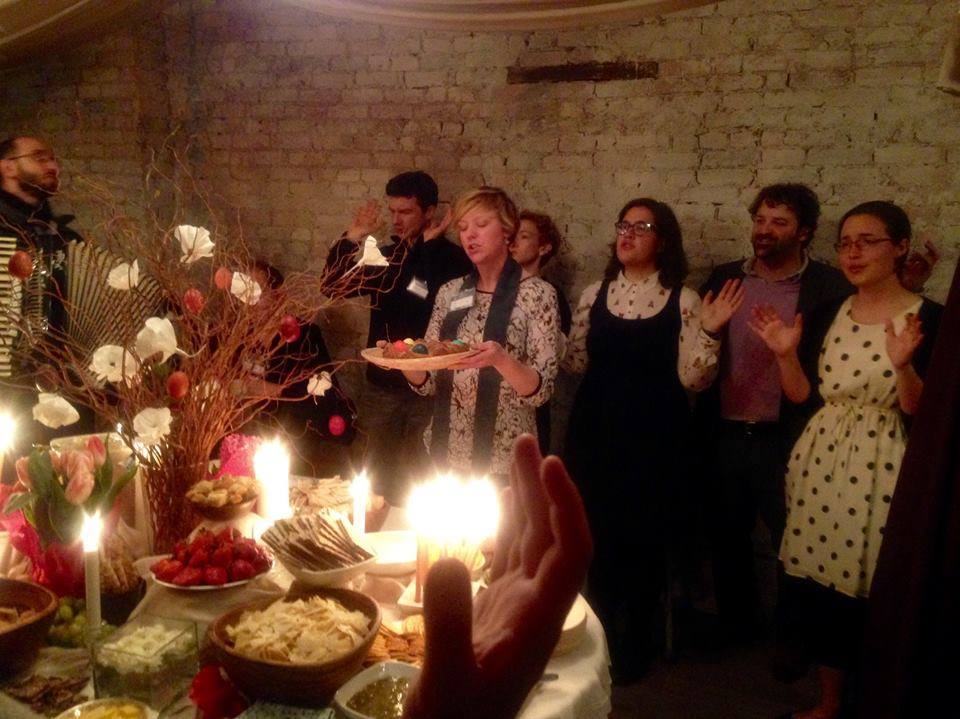 As wise prophets have done for thousands of years, Emily Scott could foresee where American forces of isolation and exclusion were headed. She saw this as far back as 2008. Facing these crises, her pastoral inspiration drew from the ancient Christian church that understood the best way to bridge the chasms of race, ethnicity and culture was to start by breaking bread together.

Now, in the midst of a global pandemic and with the United States more deeply divided than most of us have seen in our lifetimes, Emily’s idea of transforming “church” into a meal is taking off in communities scattered coast to coast. In May 2019, our online magazine reported on the trend in an article by Henry Brinton. In his reporting, he cited one of the milestone books in the movement, We Will Feast: Rethinking Dinner, Worship and the Community of God. Readers who turned to that book found these opening words:

In 2008, Brooklyn pastor Emily Scott announced that her church, Saint Lydia’s, would begin holding their weekly service over dinner. Longing to dispel feelings of isolation that city living fosters for so many young New Yorkers, Scott decided to model her service around the early church practice of Eucharist, having a meal together. From those beginnings and in the span of just a few years, small, independent dinner-church communities emerged all around the world. These communities do not focus on worship first and then eating together later; they understand the meal itself as worship.

Now, Emily Scott is telling her own story in For All Who Hunger: Searching for Communion in a Shattered World. 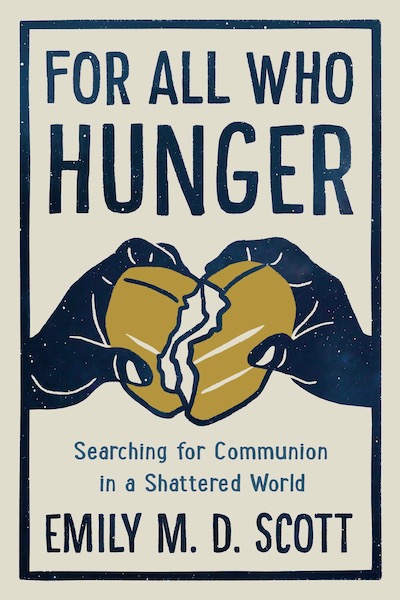 If you are intrigued by this flourishing movement, this is The Book you need to read. In the lingo of comics and graphic novels, this is the Origin Story of a spiritual superhero. No, Emily doesn’t claim to have any super powers, but her book certainly tells a heroic story of launching this movement when everything that could possibly go wrong for her fledgling congregation—did.

Anyone familiar with Brooklyn and the larger New York City area knows that finding space—any space!—for a church “start” with zero funding is a seemingly impossible dream. Emily and her friends quickly encountered many forms of that “impossible” challenge. Some of the real-life adventures in this book make for jaw-dropping and page-turning chapters.

If you are interested in learning more about this movement, buying Emily’s book is much like the dawn of the labyrinth movement in spirituality several decades ago. Now, there are dozens of books about that spiritual discipline—but the foundational book remains the 1995 book by the originator of the labyrinth renewal, Lauren Artress: Walking a Sacred Path. If you’ve got a copy of Lauren’s original book on your shelf and occasionally refer to it—you’ll definitely want to have a copy of Emily’s book next to it. You’ll find yourself going back to Emily’s book again and again.

One crucial reason to get this book is that Emily’s story—and the story of the movement—is not instantly available on Wikipedia. No one, as of November 2020, has created those pages. This can lead online searches to branch off toward other resources, some of which have nothing to do with the core movement that stems from 2008.

Where can you find Emily and the real resources online? You can follow Emily right now on Instagram—or on Facebook. She also has a homepage online with more information about dinner church. And, she’s part of a Dinner Church Movement website, as well.

“One reason I wrote this book is that I have seen other things popping up trying to promote ideas that may sound like our dinner church. I’ve seen some things out there that want to take this idea in a whole different way—a more conservative or evangelical way,” Emily said in our interview about her new book. “I’m not interested in being proprietary about this, but I want our story to be preserved in an accurate way. Also, I’m concerned that women’s roles in ministry be properly lifted up. It was just time to have this story out there in book form so people understand how this came about.”
Then, she paused and added, “This is also important to explain: In my book, I clearly credit my own roots in this whole idea. I had my own mentors who helped me and I was part of rich experiences in other congregations that became tap roots for what we did. In fact, it doesn’t even make sense to say that someone invented this—because really what we’re doing here goes right back to the early church 2,000 years ago. One way to describe this is that we’re trying to go back to the core of the church.

“We all know there have been movements similar to this down through the centuries. There are so many influences. There’s the Wesleyan Love Feast; there are Agape Meals. So, what’s unique in what we’re doing now? First, it’s the two words together: ‘dinner church.’ The first person I’m aware of using that phrase, ‘dinner church,’ was my friend Rachel Pollack Kroh who helped me with this—and she’s in the book. Those two words really help people to better understand how we can engage meals in this way.

“The other piece that’s particular to what we’re doing is the way bread and cup are integrated into the meal. This isn’t something you come to church to observe at a distance. We are coming together, cooking the meal and then eating the meal and blessing the cup—all in a way that is completely integrated. It’s a real meal. Then, the idea we’re sharing with people is that every table can be a Eucharistic table. The idea is that God comes to our most ordinary meals.

“We’re saying: The sacredness is right here with us.”

A Place for All the Marginalized

In fact, that’s how Publishers Weekly magazine described her book, when PW recommended her book as one of the top choices in PW’s annual roundup of Religion and Spirituality books for its Holiday Gift Guide. The PW review said:

Lutheran pastor Scott asks in her exceptional debut: If you strip from church all “the creeds and the chasubles,” what would be left? The answer, for her, became St. Lydia’s Dinner Church in New York City, which she founded in 2008 as a place for queer, marginalized, artistic, nerdy, and often lonely lovers of God to gather for bread, wine, and the words of Jesus. She details daily foibles and moments of inspiration that come with working with her congregation. Scott’s writing is leavened by a healthy dose of self-awareness and her stories capture the humanity of her mission and community with a light sacramental touch. Fine observations (“We are holy not because we are good but because we are loved”) and the terrific use of quotes from Joy Harjo, Pablo Neruda and Flannery O’Connor guide readers through Scott’s life within the church.

A Three-Headed Dog in the Midst of Worship

When PW magazine refers to her “exceptional” style that is “leavened” with “fine observations”—the reviewer is pointing to the simple fact that this book is a “good read.” In fact, some sections flow like a novel. Emily did not write this book as a founder trying to insist upon new rules for her readers to follow.

In one word, the style of this book is: wonderment.

There’s an engaging humility in these true stories. For example, Emily’s first attempt at a meal is just a small gathering at a friend’s home. There’s no bright-light revelation that night. Even though Emily strongly feels God’s spirit moving through her community, she often is discouraged—and her rag-tag band of followers become nomads moving through a variety of locations that will give them space. Finally, they find a ramshackle site in Brooklyn that is barely habitable and has only a single bathroom. Then, Emily and her friends make the fateful decision to let a local theater company share the little building as a place they can store their costumes and other gear for productions.

That company is presenting an unusual outdoor production called The Dreary Coast, which involves such horrific figures from ancient mythology as Charon, the ferryman to the world of the dead, and Cerberus, the multi-headed dog. Each night, the troupe’s actors don their costumes in St. Lydia’s basement and ascend into the space used by the dinner church so they can wait in line for the building’s one bathroom.

Quite literally, Christians and Demons mingle in this cramped space—sometimes in the middle of Emily’s liturgy. You won’t put this book down during those scenes, because they are so compelling. And that’s just one section of the adventures experienced by this tiny congregation seeking spiritual solace in the midst of one of the world’s most diverse and daunting cities.

“This is not a ‘how-to’ manual about dinner church. I had no interest in writing that kind of book,” Emily said in our interview, “because that’s not my message. I have never encouraged people to try to mimic St. Lydia’s. And, really, there’s no way to create a carbon copy of what emerged at St. Lydia’s.”

No kidding! In addition to sharing their sacred space with elaborately costumed demons—their Brooklyn neighborhood also suffered the full force of Hurricane Sandy. Some of the toughest lessons the community learned were the direct result of that devastating storm. No one would want to exactly follow Emily’s example.

“My message is not that dinner church is the answer for everyone everywhere. It isn’t. My message is that we need to get more in tune with our own communities. We need to be attuned to our own culture and relationships so we can sense where the Spirit is moving. St. Lydia’s grew organically with the Holy Spirit out of the culture around me in New York. The way people engaged with me in that community at St. Lydia’s will be different than the way other people might engage in other communities.”

In fact, Emily already has moved to a much different congregation, this time in Baltimore called Dreams and Visions. Visit that congregation’s website and you’ll see a photo of Emily leading worship in a socially distanced outdoor setting. Stay tuned! We all can hope that a future memoir will describe Emily’s adventures in Baltimore.

“So, I want to warn readers: Don’t try to copy us,” Emily said in our interview. “That’s the main thing I hope people will understand. Yes, this book is the story of how we became a dinner church at St. Lydias—and what we learned along the way. This book is a call to let the Spirit move us into new forms, based on what each community may discover. I’m encouraging us to build what will meet the hungers and needs of the people living around us—whatever our community may need.

“That would make me happy—if people read my book and it inspires them to create some entirely new form. It may be something quite different from dinner church. We need to be open to following where God is calling us to form new kinds of communities. My real job is to help clear the paths so that new things can emerge.”

Reposted with permission from ReadtheSpirit.com