A Prophet for These Times, When Christianity is in Crisis

One of the most widespread Christian movements of the 20th Century is in deep trouble. Don’t take my word for it. Search the word “evangelical” in Google-News and you will shake your head wearily at the tragic headlines—from angry public confrontations to rampant bigotry, mudslinging and sexual abuse. In his February 2022 analysis of this crisis for The New York Times, David Brooks writes:

“There have been three big issues that have profoundly divided evangelicals: the white evangelical embrace of Donald Trump, sex abuse scandals in evangelical churches and parachurch organizations, and attitudes about race relations, especially after the killing of George Floyd.”

For most of American history, the word “evangelical” was proudly claimed by Christians who loved Jesus and wanted to make the world a better place. So, this truly is a historic turning point when so many religious leaders across America—including many Christian leaders themselves—are arguing that it’s time to retire the explosive term “evangelical” altogether.

But then, they ask: Where does that leave Christians who still want to follow Jesus’s teachings and do good in our world? Is there a life-giving pathway forward for Christians who deeply love Jesus and see in Christ a welcoming, inclusive and socially just calling for our world? 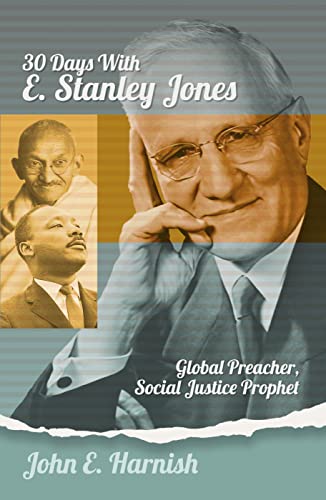 MEET E. STANLEY JONES AND DISCOVER HIS EMBRACE OF THE WORLD

Meet E. Stanley Jones. Take a moment to click on the book cover and order a copy from Amazon. You will find yourself surprised—and inspired.

In his heyday, Jones was a global Christian teacher who most Americans considered as important as Billy Graham in spreading the message of Jesus around the world. He was a prophetic voice against racism within Christianity and also had an enormous impact in worldwide interfaith relationships. As we reported earlier, Jones was the catalytic figure who connected the message of Mahatma Gandhi with the Rev. Dr. Martin Luther King Jr.

Right now, there is a small but growing worldwide movement to revive the message of this humble and deeply compassionate teacher by lifting up the many treasures from this once-best-selling author. Our publishing house is part of this movement. This week, we are publishing 30 Days with E. Stanley Jones—an inspiring introduction to his life and teachings designed for a month of inspirational reading and for small-group discussion. We are launching our book just as the E. Stanley Jones Foundation, which has maintained his literary legacy, closes in on its effort to bring complete editions of the 27 inspirational books Jones wrote during his lifetime into contemporary paperback editions. The year 2025 will mark 100 years since Jones’ first books began circulating around the world. Both our publishing house and the Jones Foundation hope that Jones’ message may once again help to call Christians toward a more compassionate embrace of the world.

“It is our good fortune that a person like E. Stanley Jones came into our world,” said Anne Mathews-Younes, who is Jones’ granddaughter and the president of the Foundation. “What was so powerful about his message and the reason so many people around the world wanted to see him, to hear him and to read his books was that he truly was in love with the whole world. He knew Jesus was his best friend—and, as a result, he saw everyone around the world as a friend.”

“He wanted to put his arms around the whole world,” said John Harnish, the author of the new 30-day reader of inspiring stories drawn from Jones’ life.

“Yes, he did,” said Mathews-Younes as the two spoke by Zoom in an interview about the release of Harnish’s new book. “And that’s what you’ve done in your new book. You’ve put your arms around dozens of stories from throughout his life that show his spirit and his message.”

In the Preface that Mathews-Younes wrote for Harnish’s new book, she puts it this way: “My grandfather was recognized as an evangelist who did not ask you to leave your intellect at the door. Rather, his messages engage the mind as well as the heart with the deeper and eternal matters for our world. … His words brought hope and refreshment to millions of people from every walk of life and I hope that these passages—skillfully chosen by John E. Harnish—do the same for you.”

‘IF PROTESTANTS HAD SAINTS, E. STANLEY JONES WOULD BE ONE.’

The book’s Foreword was written by Dr. W. Stephen Gunter, one of the leading scholars of evangelism today who is active in the movement to lift up Jones’ teachings for a new generation. In that Foreword, Gunter writes in part:

Shaped in the womb of holiness Methodism, E. Stanley Jones’s writings exemplify this foundational Wesleyan principle: his stories (and his own personal biography) warm the heart, but they are without fail informed by sound scriptural principles. In their very essence, Jones’ writings are theological lessons to live by. That is why I love Jones’s writings, and that is why I enthusiastically accepted the invitation from the Rev. John E. Harnish to write a commendation and foreword for this book. This book is unlike most every devotional book I have ever seen: it both warms the heart and instructs the mind—a unique contribution to the genre of devotional literature.

In these pages you will get to know the heart and mind of E. Stanley Jones. Each of these devotionals stands on its own with the following characteristics:

...You look through a window of insight into the mind of Jones.
...You read a life vignette that illustrates a foundational concept that informed his ministry.
...You discover a pivotal principle that has application to the current context.
...You “meet Jesus again for the first time.” And this Jesus challenges your vested assumptions about what it means to be a Jesus-follower. …

If Protestants had saints, E. Stanley Jones would be one. …

E. Stanley Jones would like this book, and I think you will too.

Order a copy from Amazon. You will find yourself surprised—and inspired. As of February 15, 2022, the book will be available in paperback as well as a sturdy hardcover edition. Soon, it will be available on Kindle as well. The book also will be on sale this week at Barnes & Noble, including in the Nook version—plus at Walmart and other online retailers.

LEARN ABOUT the ongoing work of author, pastor and teacher John E. Harnish by visiting his website. Known as “Jack” to friends and colleagues, you also can learn about upcoming events and classes Jack is leading about the legacy of E. Stanley Jones. If you are interested in inviting Jack to share with your community, it’s easy to contact him through his website.

LEARN ABOUT how the news of this book launch is moving from American communities to a global audience in this Front Edge Publishing column about the book’s reception.

LEARN ABOUT Anne Mathews-Younes and the work of the E. Stanley Jones Foundation by visiting the foundation’s website.

LEARN ABOUT another Christian author and teacher who has been influenced by the message of E. Stanley Jones: Ken Whitt’s own book is appropriately called God Is Just Love, and tells readers about the many ways families can develop a healthy love of Jesus and the world.