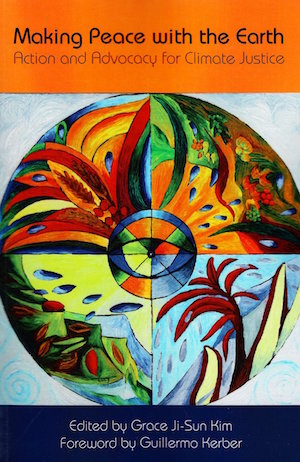 Making Peace with the Earth

Excerpt from the Preface

I remember visiting my grandmother's house when I was a young girl living in Korea. 1 I have fond memories of playing in the madang (a Korean term that describes a courtyard within a traditional Korean home). Most Korean houses are surrounded by a large metal fence with a front gate that leads into the madang.

A typical part of Korean homes, the madang is much like a family room where family and friends gather to rest, talk, share, and engage with each other. Most of the rooms in the home are entered through the madang and thus it serves as a space for encounter and sharing, celebration and fellowship, greeting a visitor and welcoming a stranger. Ancient, medieval, and even contemporary European buildings are built on the same principle. Perhaps the madang is something like the courtyard at the Cloisters in New York City, although the surrounding building there is far larger than what my grandmother had or what most Korean homes would have. My grandmother's home was small, with just two rooms leading away from the madang.

The tenth assembly of the World Council of Churches (WCC) was held in Busan, South Korea, from 30 October to 8 November 2013. Participating churches, along with ecumenical organizations and groups, created a madang with information booths, cultural performers, and workshops. This madang became an energetic meeting place where individuals and groups continued ongoing conversations, shared, brainstormed, envisioned, and reimagined.

The participants in the tenth assembly adopted a message that asked

churches and Christians to join in a "Pilgrimage of Justice and Peace." Many

are now working on what it means to be on this pilgrimage.

Part of this journey and pilgrimage involves doing environmental justice

Why should churches address environmental or climate-change issues? Why should Protestants join Orthodox, Roman Catholics, and Evangelicals in caring for creation initiatives? Why should Christians look to join interfaith work with Jews, Muslims, Hindus, Buddhists, and other faith traditions? Why should they advocate for climate justice and peace with the earth? These are just some of the questions that Christians, churches, and faith communities face when addressing climate change.

In light of these questions and doubts, the WCC is addressing climate change for two specific reasons. First, churches in various parts of the world recognize how the consequences of climate change affect the lives and livelihoods of their communities. In an effort to respond to these consequences, churches are helping to develop resilient communities, equipped to adapt to climate change. These churches benefit greatly by learning from the work of other faith communities from around the world. Second, at the local level, churches of different denominations are coming together to respond to the

impacts of climate change and to advocate at local and national levels for policies that respond to the needs and rights of vulnerable populations. In both instances, the WCC has a unique ability to build networks and relationships between churches around the globe, and to accompany and enhance their work.

As scientific reports confirm, climate change affects the people who have been made the most vulnerable in our societies. Climate change intertwines with issues of land, food, work, devastation, and human dignity. Climate change often results in people becoming vulnerable to losing their land and being forced to live in other areas that are not devastated by climate change. The rights of the victims of climate change are being violated in various ways and the threats to human beings and to life in our planet will only get worse.

Religious leaders and faith-based organizations must embrace the climate change

issue vigorously. Advocacy for the earth must become a priority. For example, all must work towards preventing Earth's temperature from rising more than 2 degrees Celsius. Unlimited carbon pollution must be stopped. There needs to be a strong mitigation of CO2 emissions by wealthy countries, so those countries still developing do not suffer from a burnt-out planet, through no fault of their own. All these steps are crucial to address climate change.

Environmental justice is intimately related to economic justice. The environment

affects our economy, and people who live in poverty are the most affected. To emphasize and illustrate the link between these two intertwined issues, the WCC adopted the term eco-justice.

Furthermore, without environmental justice, there cannot be peace. The WCC's International Ecumenical Peace Convocation, held in Kingston, Jamaica, in 2011 clearly stated that there can be "no peace on earth without peace with the earth." The way we have related to the earth, however, is with little conservation and no restraint. We have lost any tradition of being stewards of the earth. This path of violence and domination may not lead to open war, but it contributes to the destruction of the earth.

The earth cries out and pleads with us to join together to work toward climate justice and environmental justice. We need to advocate for the earth and be at peace with the earth. We need to come into the earth's madang and be in that space to share, communicate, fellowship, greet a stranger, and welcome a friend. We need to bring Christians, Hindus, Buddhists, Muslims, individuals, communities, politicians, churches, and corporations into the madang, so all can challenge each other to live a life of stewardship rather than of greed, domination, and destruction. We all need to turn to the God of life and ask God to lead us to social justice and peace.

To respond to this threat to humanity and to earth as a whole, even climate change

skeptics must join in the journey for the protection and sustainability of the earth. This book tackles the important ecological-justice questions of our time. It is a collection from climate activists, faith leaders, theologians, and others who are on the pilgrimage of justice and peace, reflecting on climate justice and peace with the earth. The concrete experience of churches around the world can be instructive for the reader's church, and this volume gathers that hard-earned knowledge. This book seeks to provide imaginative possibilities of how the church, faith communities, individuals, and the academy can

move forward to help save God's creation. It serves as an example of a virtual madang. It is my hope that readers will create madangs around the world: linked-together places for the worldwide church to work together to make changes in the world that will help lead toward peace on earth. The madang is open; let us come in, converse, envision, and reimagine. The journey has already begun and our hope is that everyone will join in this journey of justice and peace with the earth.

Making Peace with the Earth:

Action and Advocacy for Climate Justice

The greatest untapped natural resource for addressing the world's most pressing problems is the energy of religiously committed people. This volume gathers the expertise of activists, theologians and faith-based organizations to inspire and encourage churches and church people everywhere in grassroots work and advocacy for climate justice.

As they make plain, no issue so violates the core of Christian convictions as the jeopardizing of human life and creation through climate change. Writing from the concrete experiences and programmatic efforts of churches in Greece, Scotland, Sweden, Finland, Germany, tropical Africa, Latin America, and the Pacific Islands, the 22 theologians and activists in this volume also address related issues of health, human rights, land and deforestation, food security, migration, divestment, as well as creation spirituality and theology.

Making peace with the earth will not be easy, say the contributors. But now is the time for religious leaders, church people and organizations to make climate their priority. This volume will nurture and inform their engagement.

Edited by Grace Ji-Sun Kim. She received her Ph.D. from the University of Toronto and is an Associate Professor of Theology at Earlham School of Religion, Indiana, USA. She is author of nine books, the most recent being Embracing the Other: The Transformative Spirit of Love (Eerdmans, 2015). Kim is a much sought after lecturer and has given papers/lectures throughout the United States and in Korea, Myanmar, Spain, Brazil and Canada. Kim writes for The Huffington Post, Sojourners, EthicsDaily.com and Feminist Studies in Religion (co-editor). She has also written for The Feminist Wire, Feminism and Religion and The Nation.

Grace Ji-Sun Kim is an ordained minister of word and sacrament within the PC (USA) denomination.

Foreword by Guillermo Kerber, a theologian and professor from Uruguay, coordinates the WCC's work on Care for Creation and Climate Justice. Formerly Professor of Social Ethics at both the National and Catholic Universities in Montevideo, he is author of several works in the areas of climate change, development, and human rights.

Making Peace with the Earth:

Action and Advocacy for Climate Justice

WCC Publications is the book publishing program of the World Council of Churches. It facilitates global Christianity's "alternative voice" and enhances the larger visibility and cultural presence of the ecumenical movement.