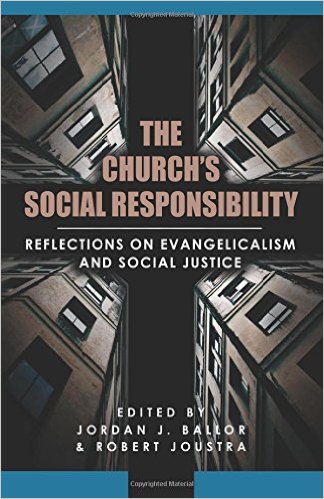 This essay is adapted from the introduction to The Church's Social Responsibility: Reflections on Evangelicalism and Social Justice, a new book edited by Jordan J. Ballor and Robert Joustra, available through Christian's Library Press.

An understanding of the rise, decline, and reinvigoration of institutions in the history of the Christian West, with special attention to the role of the church in relation to worldly authority, is necessary to properly orient a discussion of the church's social responsibility today. This is particularly true when focusing on the legacy of evangelical churches in the North American context, which can lack historical self-awareness and conscious rootedness in tradition.

The era of the Protestant Reformation is often depicted as the point of rupture in the unity of the Christian West. While the rise of various confessional traditions provided alternative ways of understanding the church's institutional role in terms of worship, sacraments, and doctrine, the same basic model of the relationship between churchly confession and civil power dominated Roman Catholic and magisterial Protestant polities. Although there were diverse models of relating to those communities who did not conform to the dominant confession under a particular sovereign, the close connection between the institutional church and civil government continued to reign.

The model of Christendom as a unity of church and state institutions, in its various expressions, began to wane in its pre-eminence as this structural bond between church and state was reformulated following the wars of religion and the rise of increasingly robust free church movements. The revolutions of the eighteenth and nineteenth centuries in Europe and the Americas were not only political phenomena, but also involved the loosening, and in some cases the severing, of the marriage of church and state.

These developments demanded new ways of thinking about the church and its role in society. The Dutch Reformed theologian and politician Abraham Kuyper (1837-1920) was a seminal figure in his vision of a free church within a sovereign, non-confessional state. Kuyper thus called for church and state to positively relate to one another, without being wedded or conflated. On this view, which Kuyper understood as a necessary development and improvement on the older political theories of Reformed forebears, the civil government's role is to protect the freedom of the church to develop according to its own principle and vitality rather than to coerce conformity to a particular confession. Likewise, Kuyper also vigorously defended the rights of conscience, both in terms of its individual grounding as well as its institutional expression in churches and associations, from government tyranny. As he writes in Our Program, "The conscience marks a boundary that the state may never cross."

If the church was to positively relate to the civil government in this new context, the manner of this relation required further elaboration. It is at this point that Kuyper introduces his important distinction between the church conceived institutionally and organically. Taking the Pauline text of Ephesians 3:17 as his inspiration, particularly the apostle's desire that the church might be "rooted and grounded in love," Kuyper elaborates an understanding of the necessary relationship between the church rooted in the dynamic, organic life of the Spirit and grounded by the institutional structure of proclamation, worship, and discipline. The two sides of this distinction must be held together in proper balance, argues Kuyper, and overemphasis on one or the other results in a truncated and flawed view of the church.

There were some, exhausted from the close connection of church and state characteristic of Christendom, who merely wanted the church in its spontaneous, living expression without the strictures and structures of institutionalization. The exhaustion from the culture wars in North America has had a similar effect on many today, leading many to desire spirituality but without the trappings of formal religion. Others, notes Kuyper, denounce such pietism and spiritualism, and emphasize instead formal and external adherence to a creed and code of confession and conduct. By contrast we must have an appreciation and proper understanding, says Kuyper, for both the church as organism and institution. As Kuyper puts it in his sermon, the scriptural images of being "'rooted and grounded' unites organism and institution, and where Scripture itself refuses to allow any separation, it weaves them together."

This Kuyperian distinction of the church as organism and institution, properly related and without absolute separation, provides an indispensable tool for coming to a proper understanding of the church's social responsibility today. The distinction can provide conceptual clarity about disputes that continually arise within and among evangelical churches about the church's role in promoting the common good. With this distinction in hand, we have the means to properly appreciate the complexity of social life in the modern world and to invigorate the church's witness and action with both the rigor of institutional authority and the vitality of conscientious action.

The distinction itself is not a simplistic solution, however, as acknowledgment of it immediately brings along practical challenges of discerning what roles and responsibilities properly attend to whom, in what contexts, and at what times. Further distinctions must be made about the timing of speaking and acting for the benefit of society. Likewise, the technique of speaking and acting is of much importance; understanding how to speak and act responsibly is just as important as discerning when to do so.

The Church's Social Responsibility: Reflections on Evangelicalism and Social Justice introduces and explores the challenges of the church's social responsibility from the perspective of North American evangelicalism. Carl F. H. Henry's landmark 1947 book, The Uneasy Conscience of Modern Fundamentalism, indicted the social quietism of much of fundamentalism and introduced concern for social responsibility into modern evangelicalism. Henry's first chapter is the point of departure for this volume, and Henry outlines his case for why there has been a disappearance, or in his words "evaporation," of fundamentalist regard for humanity and a corresponding withdrawal from social engagement. One group was notably exempted from the sharper edges of this larger critique, however. As Henry observed, "There are Fundamentalist groups, admittedly, which have not lost a keen world reference, especially those alert to their Reformational lineage in John Calvin. Their interest in ethics is demanded, rather than precluded, by their doctrinal fervor."

Abraham Kuyper introduced the distinction between the church as organism and institution at a time of upheaval and transition from Christendom to a post-Christendom social order. Today we face similar changes as we live in not only post-Christendom but also in many ways increasingly post-Christian societies. The same temptations that Kuyper identified in his own day in the midst of such uncertainties are seemingly valid options today: withdrawal from the broader world into ecclesially defined and delimited institutions, or rejection of such institutions as outmoded and obsolete. From its beginning evangelicalism has implicitly recognized the dangers of these alternatives, and the Reformed tradition's reflections on the nature of the church and its role in society are worth revisiting and reconsidering in light of contemporary challenges. The church, both in its institutional and organic expressions, has social responsibility. Our challenge today remains the perennial challenge of the Christian faith: to discern what it means to faithfully follow Jesus Christ in the context of our individual and institutional realities.

Reflections on Evangelism and Social Justice

This collection explores the nature of the institutional church's responsibility, but also explores deeper questions related to the church's social witness: Why is the church significant? How should it speak and act-and who should do the speaking and acting? And how might various contexts affect the form that Christian responsibility takes?

An indispensable tool for answering such questions is the distinction between the church as organism and institution. A proper understanding of this distinction provides the means to appreciate the complexity of social life in the modern world and to invigorate the church's witness and action with both the rigor of institutional authority and the vitality of conscientious action.

"There is a great deal of confused and agitated discussion nowadays as to whether or not the church has a social responsibility, and if it does, how it should carry out that responsibility. The essays in this collection, written in lucid accessible prose, approach the topic from a variety of angles and offer helpful ways of thinking about the issues. Running throughout the essays is the indispensable distinction between the church as institution and the church as organism. If you find yourself confused about the church's social responsibility, this is the book to dispel your confusion."

Edited by Jordan J. Ballor and Robert Joustra. Including contributions by:

Reflections on Evangelism and Social Justice

The Church's Social Responsibility is available at www.CLPRESS.com, www.Amazon.com, and at other online booksellers.