Brad S. Gregory - Rebel in the Ranks: Martin Luther, the Reformation, and the Conflicts That Continue to Shape Our World - EXCERPT 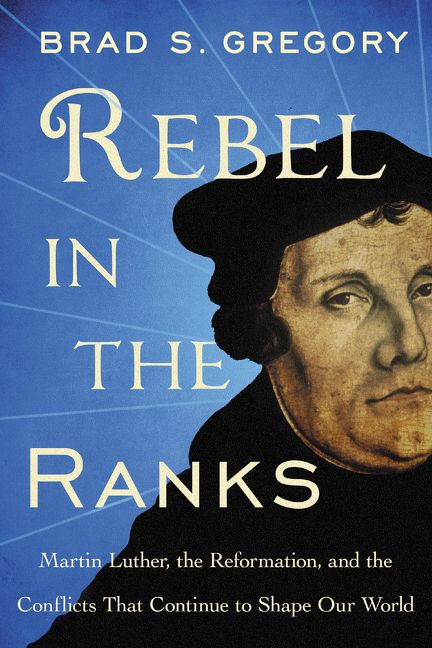 The Reformation, an unlikely series of events that transformed Latin Christianity and with it Western civilization, begins with an equally unlikely figure: Martin Luther, a pious and spiritually anxious Augustinian friar solemnly devoted to God. In 1517 on the eve of the Reformation, hardly anyone knows Luther except for his confreres and townspeople in the obscure German town of Wittenberg. Mostly, Luther keeps his anxieties to himself. He lives with thirty-some fellow Augustinians in a friary in a forgettably small town set in the oddly shaped territory of Electoral Saxony, which is part of the large stretch of central Europe known as the Holy Roman Empire. The empire is a collection of hundreds of cities and territories that includes the Germanic peoples, and it belongs to Latin Christendom, which encompasses Europe from Iceland to Poland and Lithuania and from Scandinavia to Spain and Sicily.

A Busy and Burdened Friar

By midsummer 1517, though Luther occasionally expresses a few hints of frustration and anger, he shares nothing that suggests rebellion, let alone a revolution. He's too burdened with responsibilities to imagine the Ninety-Five Theses, which he will write only a few months later.

The "lazy monk," a familiar caricature of the early sixteenth century, does not apply to Luther. Not at all. Neither does he look secluded, like the popular image of those whose religious vows of poverty, chastity, and obedience supposedly separate them off from society in lives devoted to prayer. The name of Luther's religious order, the Augustinian Hermits, is misleading in this way: they aren't hermits-loners seeking God in solitude. Neither are they monks, leading common lives of cloistered contemplation, like the Benedictines, who by the early sixteenth century have been around for almost a thousand years, or the Cistercians or Carthusians, newer contemplative orders with their origins in the monastic revival of the twelfth century. The Augustinians are friars, members of the mendicant ("begging") orders, like the larger and more influential Dominicans and Franciscans. Their religious vocations entail actively engaging with lay Christians in the wider world, known in Latin as the saeculum (the origin of our word secular).

In October 1516, Luther writes to his longtime friend Johannes Lang. Lang has recently been named the prior of the Augustinian friary in Erfurt, a bustling city more than a hundred miles to the southwest of Wittenberg, where years before Luther attended university and first entered the order. Unburdening himself to a friend he's known for years, Luther writes, "I nearly need two copyists or secretaries," adding later-in yet one more letter he's scratching out with ink-dipped quill pen on paper in his small, regular handwriting-"all day long I do almost nothing else than write letters." But despite his lengthy protestations to Lang, Luther does a lot more than letter writing as Wittenberg's autumn days grow shorter. Other more pressing duties and demands leave him feeling overwhelmed:

I am a preacher at the monastery, I am a reader during mealtimes, I am asked daily to preach in the city church, I have to supervise studies, I am a vicar (and that means I am eleven times prior), I am caretaker of the fish pond at Leitzkau, I represent the people of Herzberg at the court in Torgau, I lecture on Paul, and I am assembling a commentary on the Psalms. As I have already mentioned, the greater part of my time is filled with letter writing. I hardly have any uninterrupted time to say the hourly prayers and celebrate Mass. Besides all this there are my own struggles with the flesh, the world, and the devil. See what a lazy man I am!

So much for the life of contemplative seclusion he imagined when he chose his vocation more than ten years earlier! At that time he sought a highly regulated life of prayer, worship, self-scrutiny, and self-discipline. For more than another year after Luther writes this letter, only a few people-some German Augustinians, some townspeople and students in Wittenberg, and a handful of others in Electoral Saxony-know who Luther is and recognize his dedication and talent. Which is why at age thirty-three he is asked to do so much. And this hardworking friar and obedient servant of the Church does it well, not wearing his spiritual anxieties on the coarse woolen sleeve of his friar's cowl.

Luther's Struggles Beneath the Surface

Devout, dedicated, and perceptive, Luther criticizes many of the problems that similarly bother others who care about the faith and the Church. But these are not the problems he has in mind when he tells Lang about the last thing that keeps him so busy: "my own struggles with the flesh, the world, and the devil." For Luther, this conventional monastic phrase veils something deeper than the usual dissatisfactions with sinful Christians who fail to live up to the Church's teachings. The phrase is as real to Luther as his own flesh and blood; it goes far beyond failing to follow Christ by inadequately practicing the virtues as taught by Christian humanists or scholastic theologians.

Luther is tormented nearly to the point of despair not despite but because of his life as an Augustinian and the exacting way in which he endeavors to live up to its demands.

Few others know this. Those who do include a few fellow Augustinians, such as Staupitz and Wenceslas Link, who also came to Wittenberg from Erfurt when Luther moved in 1511. Luther confides in Staupitz. He confesses his sins to him in the sacrament of penance and seeks Staupitz's advice about his spiritual struggles. Luther's basic problem is rooted in his own experience: despite the Church's assurances that God forgives his sins in the sacrament of penance, Luther doesn't feel forgiven. He doesn't feel as though things have been set right between him and God. And that is what he craves most in life, much more than an advance in his order, international fame, or even being recognized as an effective preacher.

The sacrament that seems to work for most everyone else doesn't work for him. He doesn't experience God's mercy despite how widely it's extolled as a counterbalance to God's justice in sermons and sculptures, paintings and prayers alike. For Luther the scrupulous Augustinian friar, there is only the God of judgment. And for Luther the relentlessly introspective pursuer of holiness, that's not a good thing.

In Luther's experience, God's judgment on him can only be a condemnation-the condemnation of a never-good-enough, constant sinner. His experience leads him to a shocking conclusion: the central commandment of Christian life is not simply difficult but impossible to fulfill. According to scripture, Christ said, "You shall love the Lord your God with all your heart, with all your soul, with all your mind, and with all your strength" (Mark 12:30). Who can live up to that? Anything less than being "perfect as your heavenly Father is perfect" renders you subject to divine condemnation. When you die, God will consign you to hell forever.

The more Luther seeks to obey, the more aware he becomes of his failures; the more he struggles, the harder the struggle becomes. He's a man caught in spiritual quicksand.

Luther's interior torments are the religious roots of the Reformation. Luther is no rebel seeking to undermine the Church. Neither does he aspire to start a church of his own; the very notion would have made no sense to him. In fact, Luther's own anxiety, intense as it is, by itself would not have produced the Reformation. Plenty of other devout men and women in the Middle Ages struggled with their own sinfulness. If Luther had kept his spiritual wrestling to himself, he probably would have remained mostly unknown. But he doesn't.

Adapted from REBEL IN THE RANKS: MARTIN LUTHER, THE REFORMATION, AND THE CONFLICTS THAT CONTINUE TO SHAPE OUR WORLD by Brad Gregory. Copyright © 2017. Reprinted with permission of HarperOne, an imprint of HarperCollinsPublishers.