One aspect of the 16th century Reformer Martin Luther’s legacy that St. Olaf and other Lutheran colleges and universities continue to embrace is the way in which he understood the concept of vocation. Before Luther, Christian concepts of vocation were typically limited to a religious calling. Clergy, members of religious orders, had a Christian vocation and others did not. But Luther understood vocation as embracing all parts of life — it wasn’t just about God’s calling people to life in the church; it was about vocation encompassing a calling as a citizen, a neighbor, a parent, a spouse, even a friend.

In a Christian context, vocation is about being called by God to particular places and spaces in the world. And I want to suggest that the verse from John 15 has something to say to us about a Christian understanding of vocation. In this chapter of John, we hear Jesus calling his disciples to a vocation of friendship.

Many of you know that “service” is seen as a prominent form of vocation for many religious people. That we are called, individually and collectively, to serve the neighbor in love. Many churches talk about being a “servant church.” There are seminars on being a “servant leader.” While some forms of service are valuable, it’s also important to point out that service is often understood in a unidirectional way. I serve you or you serve me.

Friendship, on the other hand, is a very different kind of relationship and therefore, a different way to think about vocation. There’s a give-and-take with friendship, a presumption that both sides are being nourished by the relationship. It’s referred to by authors like C.S. Lewis and Sallie McFague as potentially the most inclusive of all relationships, because in our friendships we often cross borders of race, class, and religion, that we don’t cross nearly as often in familial or romantic relationships.

Next week St. Olaf has the privilege of hosting Eboo Patel, the founder and director of Interfaith Youth Core and a national leader in interfaith work and building bridges across religious differences. He will be spending a full day with us, beginning with chapel, and there will be opportunities for students, faculty, and staff to learn from and interact with him around his book Acts of Faith: The Story of an American Muslim, the Struggle for the Soul of a Generation, the intersections of race and religion at St. Olaf and beyond, and the role of interfaith education in our curriculum and in our life together.

Why does the Interfaith Youth Core focus their attention on colleges and universities for doing the work of interfaith? Patel believes that campuses like St. Olaf provide students with the unique opportunity to live, work, play, worship — to be intimately involved in the lives of others who are racially, religiously, ethnically, economically different from themselves.

Interfaith Youth Core recently released the results of a study they did on experiences of religious diversity among students on college campuses. This study tracked close to 4,000 students over a period of four years and their experiences with others who hold different beliefs than they do.

The study found that 70 percent of fourth-year students reported a high commitment to bridging religious divides with their peers. But only 14 percent participated in interfaith dialogue on campus, and less than half of students said they dedicated time to learning about other religions in college.

This is really interesting data. The majority of students surveyed said by the end of the their time in college they were convinced that working across religious differences should be a high priority and that they were personally committed to it. At the same time only a small fraction of those convinced of its value actually spent any time actually doing so.

One of the researchers who headed up the study said, “There’s this gap that I think is important for us as educators to really think about … [It makes me wonder how we can] help students bring their values and their behaviors into greater alignment.”

In addition, while students who affiliate with a religion largely felt like they had spaces for religious expression on campus, it’s notable that less than a third of Jewish students felt their campuses were receptive to religious diversity. The majority of Muslim students interviewed said their campuses were at least somewhat accepting; at the same time about 20 percent of Muslim students also felt pressure to put limits on expressing their beliefs.

The survey shows that college and universities still have significant work to do to be a place where all students experience their campus as a safe space and one they can call home. What we’re after at St. Olaf is a campus that values students who are religiously affiliated as well as those who are not; a campus that supports all students in the living out of their beliefs. In addition, St. Olaf is striving to be a place where people of all perspectives can come together, to talk to one another about their differences and about what they have in common and about how they can join together in creating a more compassionate and harmonious world.

One big takeaway for me from the survey was that most students interviewed felt ill-equipped to do the work of bridging religious differences. Only one third felt like they learned skills during college for how to better engage with diverse belief systems.

But here is where we return to the topic of friendship as form of vocation: while over 90 percent of students had at least one interfaith friendship by their last year of college, the majority had never had a disagreement about religious differences, indicating that deep conversations about religion, faith, and beliefs likely aren’t happening as often as they could.

The researchers conclude by pointing out that friendships among college students who hold different beliefs present great opportunities for doing the work of building bridges across religious difference. Friendships have the capacity to create more comfortable contexts where we can explore some of our deepest convictions and grow in our understanding of why our friends hold different views.

In his powerful memoir, Acts of Faith, Eboo Patel talks of the many friendships he has cultivated across religious differences, about the challenges and rewards of doing so. In fact, he’s spending his life cultivating his vocation as a friend whose relationships bridge religious divides. And during his visit next week, he will meet us squarely in the messiness of current racial reckoning, our political differences as well as our religious ones. I’m hopeful that his visit will be an opportunity for all of us at the college to be in conversation with him about his vision for a racially and religiously inclusive campus and society. I’m also hoping that his visit may help all of us at St. Olaf to be more bold in cultivating friendships that also wade into the waters of differing beliefs and world views about religion and beyond.

“I call you no longer servants but friends,” Jesus said. What might happen if we all were to consider friendship, especially with those who differ significantly from ourselves, as part of our vocation?

This blog was adapted with permission from a Chapel Talk given Wednesday, October 21, 2020 in Boe Memorial Chapel by Deanna A. Thompson.

Author, advocate, and interfaith leader Eboo Patel will give a virtual keynote address at 7 p.m. Central on October 29, hosted by the Lutheran Center for Faith, Values, and Community of St. Olaf College titled “Racial Justice, Interfaith Cooperation, and the Common Good on Campus and Beyond.” You may register for the keynote address here. All are welcome and encouraged to attend.

See “Report: College Students Care About Interfaith Dialogue, But Most Don’t Engage in It,” in Diverse Issues in Higher Education, September 2, 2020. 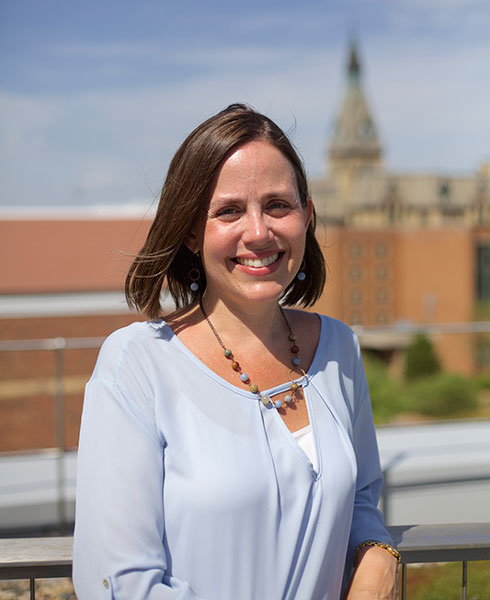 Dr. Deanna A. Thompson is Director of the Lutheran Center for Faith, Values, and Community and Martin E. Marty Regents Chair in Religion and the Academy at St. Olaf College in Northfield, Minnesota. Before moving to St. Olaf, Thompson taught religion for over two decades at Hamline University in St. Paul, MN. Thompson is a sought-after speaker on topics ranging from Martin Luther and feminism to the intersections of cancer, trauma, and faith, and what it means to be the church in the digital age. She is author of five books, including Crossing the Divide: Luther, Feminism, and the Cross; The Virtual Body of Christ in a Suffering World; and most recently, Glimpsing Resurrection: Cancer, Trauma, and Ministry.

Church Anew is dedicated to igniting faithful imagination and sustaining inspired innovation by offering transformative learning opportunities for church leaders and faithful people.
As an ecumenical and inclusive ministry of St. Andrew Lutheran Church, the content of each Church Anew blog represents the voice of the individual writer and does not necessarily reflect the position of Day1, Church Anew or St. Andrew Lutheran Church on any specific topic.