As a Black woman prepares to become the first Black, first woman, first South Asian to occupy the U.S. vice presidency, Black women’s bodies have been on my mind. My own body has been on my mind. I have been thinking about self-care, wellness, and the importance of never negotiating boundaries. I am aware that not all hold my beliefs about my body in such high regard. Society at large tends to devalue and diminish Black women’s bodies. Who we are and what we represent and how we re-present remain cause for celebration and consideration.

I watched the television series P-Valley. Judge all you want. Say what you will. I was glued to the tube for every episode. The show about a strip club captured me because of its Southern flavor and flair. Its setting is just miles from my hometown of Memphis, Tennessee. The show’s creator, Katori Hall, hails from the Bluff City as well. Episodes are peppered with dialogue and cultural references to this area in the Mississippi Delta.

To say P-Valley is about Black women in a strip club is a gross understatement and artistic interpretation. Its messaging centers on self-provision and agency. It pivots around a place where Black women can use what they have and make it work for them and their families. At The Pynk, Black women’s bodies is business. This gentleman’s (and gentlewoman’s) club in Chucalissa is also the source of theological ecstasy and spiritual release. The club owner, a Black transgender woman named “Uncle Clifford,” acts as priest using the strip main stage as altar.

Sexuality. Theology. Sociology. Pecuniary Security. Black women’s bodies have been on my mind.

Whatever affirmation and existential prowess P-Valley depicted, reality quickly took away. The images of Anjanette Young’s naked body surrounded by numerous Chicago police officers is well … arresting. In a botched raid, men in blue broke into a Black woman’s home while she was undressing. Fearing for her life, Young did not have or take time to cover her body as officers rushed her and her home. For over two minutes, there was this Black body exposed while police rummaged her personal belongings looking for something, someone not there. The police disregarded Young’s more than 43 shouts of “You have the wrong house.” Even more painfully, they disregarded her nude Black body.

Unlike the women in P-Valley who freely, unashamedly share their physical giftedness as they choose, Young believed she had no option. Stand there stark naked or lose your life. The Mayor of Chicago, a Black lesbian, has promised accountability, more than likely fiscal compensation. However, what can pay for Young’s humiliation in what is supposed to be her place of safety? Breonna Taylor too reminds us of a recurring theme that a Black woman’s house is not always her home.

Sexuality. Police brutality. Sociology. Accountability. Black women’s bodies have been on my mind.

The United States stands on the cusp of another historical presidential inauguration. Vice President-elect Kamala Harris will become the first woman of African descent to walk the halls of the White House. While Michelle Obama resided there, Harris will be in the room — the room where deliberations of national impact are made. Her Black female body will grace 1600 Pennsylvania Avenue also known as 1600 Black Lives Matter Plaza.

There were other Black women who put their bodies on line to pave the way for Vice-President-elect Harris. Charlotta Spears Bass was the first Black woman to run for vice president of the United States. In 1952, she ran on the Progressive Party ticket with Vincent Hallinan after rescinding her Republican affiliation. Post becoming the first Black woman elected to Congress in 1968, “unbought and unbossed” Congresswoman Shirley Chisholm became the first Black person to seek the Democratic party’s nomination for president in 1972. The present state of Vice President-elect Kamala Harris pivots from the past activism acumen and the political prowess of these two Black women.

Sexuality. Politics. Gender. Possibility. Black women’s bodies have been on my mind.

Of course, the biblical scholar in me would be remiss not to draw from this textual well. The story of the Queen of Sheba is worth noting. The narrative in 1 Kings 10 and 2 Chronicles recounts her traveling to see King Solomon. She does not come hat in hand, but with a great caravan and spices, gold and precious stones to boot. What is intriguing is that this Ethiopian woman comes to Solomon and “tells him all that is on her mind” (1 Kings 10:2). She has been wondering if the word about Solomon is true and wanted to see for herself. Ancient texts attest to the power of Black women having something on their minds.

When moments of imposter syndrome seek to wash over me, I am reminded that it is my Black woman presence folks are reacting against. It is their overreaching into me that instigates my wanting to question me. It is their confusion about what I embody that strives to make me doubt me. Nevertheless I persist. Black Cinderella has left the building and refuses to be belle of the diversity, equity, and inclusion workplace ball.

Black women’s bodies, my body have been on my mind. I want this body to be around to hug and nurture my children’s children. I want to be eye candy for Black girls and yes, Black boys to not just dream, but see what is possible. With the self-sufficiency and curiosity of the Queen of Sheba, in the spirit of Bass, in the legacy of Chisholm, with the audacity of the women at The Pynk, steeped in the anger over Young and Taylor, in the hope of Harris and from the womb of my Black grandmother and Black mother — may it be so. 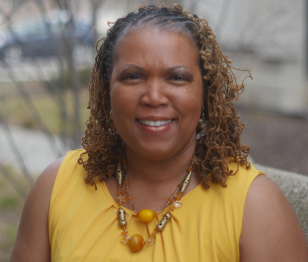