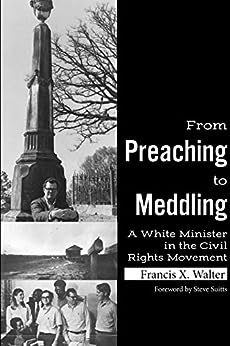 Francis X. Walter: Meeting Dr. King - An excerpt from From Preaching to Meddling: A White Minister in the Civil Rights Movement

When people hear I was in the racial justice struggles of more than a half century ago—if they have any interest—they will often ask three questions:

“Were you ever in jail?”

“Did you ever get shot at/beat up?”

The short answers to those questions are that I was with Dr. King, close up, four times. I was jailed once; it was up North and only for about an hour. It hardly counts, but I will tell it anyway. I was never shot or beat up but I believe I was close to being shot at by a white man called “One-Eyed Jack.”

My first encounter with Dr. King was on New Year's Day, 1955. That Christmas I was home in Mobile from the School of Theology at the University of the South in Sewanee, Tennessee. This young black pastor I’d heard of had accepted the invitation of the Mobile black community to give the Emancipation Day address on New Year’s Day 1955. King was then early in his ministry in Montgomery. He had accepted the call to Dexter Avenue Baptist Church in April 1954, reserving the right to travel to Boston from time to time to finish his doctoral dissertation. May 17, 1954, the Supreme Court handed down the judgment in Brown v. Board of Education. On September 5, 1954, King preached his first sermon at Dexter as pastor. In it he proposed restructuring the church to turn it to service and to put him firmly in control of all levers of power. The notion staggered entrenched church leaders; like it or not, they had selected a powerful and extraordinary man as their pastor. In Parting the Waters, author Taylor Branch quotes from a letter sent to King by his father, a minister in Atlanta: “. . . you are becoming very popular . . . you must be very much in prayer. Persons like yourself are the ones the devil turns all his forces aloose to destroy.” The letter is dated December 2, 1954.

When King appeared as the Emancipation Day orator on January 1, 1955, he was twenty-five years old; I was twenty-three. Two months and a day later, a black high school student, Claudette Colvin, refused to give up her seat to a white person on a Montgomery municipal bus and was arrested. Nine months after that, Rosa Parks was arrested under almost the same circumstances. Given Colvin’s brassy and profane responses to the police, and her young age, the committee representing the black community chose not to use her spontaneous action to challenge the segregated seating ordinance. King was on that committee, putting into practice the forces of justice and love he delineated in his Emancipation Day address in Mobile. Rosa Parks’s later case was, of course, different, was handled differently, and history was changed.

But all that was still in King’s and our future when I found myself seated on a stage inches behind him as he spoke on January 1, 1955. It was on this wise, as St. Luke might put it: My sister Patricia, then fifteen, was home so I asked if she’d like to go. She agreed. I called my older cousin-in-law, Dick Wells. Dick was my great-aunt Ida Bolivia’s eldest daughter’s husband. We categorized him as bright and charming but a Yankee from New York. He was the only adult white person in Mobile I knew who might agree to go. I figured my sister had not a clue, but I wanted her to start thinking about our racial structures. Two down. Now I had the courage to ask my girlfriend, Mary Anne McPherson. Not courage because of it being a black event, but simply because I was a coward at asking for dates—if this could be called a date. Mary Anne said yes.

We four arrived at the International Longshoreman’s Union Hall on New Year’s Day. Years later, one of Mobile’s black city council members confirmed the date and location for me; he reported the hall was still standing. In fact, it is now on the National Register of Historic Places. When I told him we were there that 1955 day, he yelped, “Get out!” At the entrance we saw two things: the hall was packed, and we were the only white people. Blocked by the crush, we stood outside the entrance along with others trying to get in. Not for long. We were bulldozed up the center aisle by ushers and found ourselves on the stage in four chairs seated directly behind the speaker’s podium. Whites experienced these gifts of hospitality over and over in black churches and mass meetings in movement days. I would be flushed with gratitude and shame, accepting this welcome. Shame for the icy toleration or outright rejection when the color of hosts and guests was swapped, gratitude for the welcome.