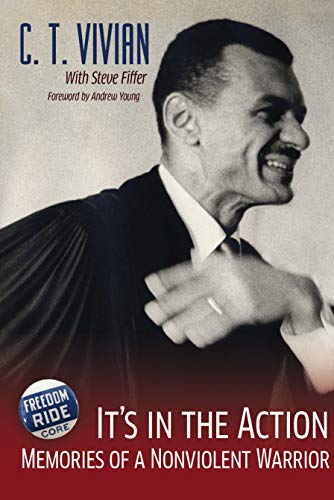 The Alliance for Christian Media, producer of the Day1 radio and podcast program, will host a virtual event with noted panelists focusing on Dr. C. T. Vivian’s memoir, It's in the Action: Memories of a Nonviolent Warrior, released in March. The Zoom webinar will be Thursday, June 10, at 7:00 p.m. EDT.

The lively conversation will be moderated by CNN’s Don Lemon and feature the book’s co-author Steve Fiffer, who worked with C.T. Vivian in the last years of his life to create the book. Also participating will be C.T. Vivian’s son Al Vivian, Dr. Bernice King, and Ambassador Andrew Young.

Registration for the free virtual event can be made through the Day1.org website or for a contribution of $50, the registration will also include a copy of the book that will be mailed following the event.

According to Peter Wallace, The Alliance executive director, “We could not be more thrilled about having Don Lemon moderate this event. He has a unique ability to facilitate important conversations among today’s brightest minds. We have no doubt he will be able to add an important voice to Vivian’s legacy of social activism. It is crucial that we continue having these conversations in the wake of alleged voter suppression and racial violence happening in our country today.”

Wallace continued, “As a preaching-focused ministry, we are thrilled to celebrate this great icon of the civil rights movement, who also was an extremely powerful preacher. He studied and taught at American Baptist Theological Seminary (now American Baptist College). Vivian was known as a man of words, a powerful, charismatic speaker, whose life and devotion to Christianity were widely recognized. We will explore his life and purpose as it applies to our beliefs and as we seek ways faithfully to address social justice in our world today.’’

Vivian, who died in Atlanta on July 17, 2020 at age 95, will be remembered fondly by those who knew him and those who are still discovering his lifelong dedication to civil rights. Vivian worked and lived in Atlanta for almost 50 years, and through the dedication of his daughter, Denise Morse, thousands of Atlantans have learned about his influence on this city. Now the book will share his story with others across our country who will also learn from his journey and his legacy.

Vivian’s influence is the real touchstone, whether it be his fundraising during Hurricane Katrina, his campaign for Morris Brown College, his historical work with the SCLC, or his founding of BASIC and a leadership institute. If it involves faith and love inour city, Rev. Vivian was likely there. And now we have his full story, in his own words. The reverend, called, “the greatest preacher who ever lived,” by Dr. Martin Luther King Jr., shares a lifetime of acquired wisdom in this posthumous memoir, It’s in the Action: Memories of a Nonviolent Warrior.

Born in Missouri in 1924, Vivian led a life that took him to Peoria, Nashville,

Chattanooga, Birmingham, St. Augustine, Selma, Chicago, and Atlanta, as well as over 40 countries. To our everlasting benefit, his focus was always on God, education, justice, love, and freedom.

Ambassador Andrew Young, who provides the foreword to the memoir, says, “We're blessed to have It’s in the Action—which while certainly chronicling C.T.’s actions in the movement also offers his thoughts on those actions.”

Before receiving the Presidential Medal of Freedom in 2013, C.T. Vivian worked alongside and offered counsel to the most significant figures. A contemporary of Dr. Martin Luther King Jr. and teacher of John Lewis, he founded and directed multiple organizations, creating contributions and waves that we’re still experiencing today. The text, co-written with Steve Fiffer and published by NewSouth Books of Montgomery, AL, recalls much of his life of faith and nonviolence.

Steve Fiffer is an author, community activist, and co-author of Jimmie Lee and James: Two Lives, Two Deaths, and the Movement that Changed America, a Harlem Book Fair nonfiction finalist. He currently serves on the advisory board of the Civic Leadership Foundation in Chicago, a nonprofit that serves underprivileged youth.

“Day 1” with host Peter Wallace has been broadcast every week for 76 years, formerly as “The Protestant Hour.” Featuring outstanding preachers from the mainline denominations, “Day 1” is currently distributed to more than 200 radio stations across America and overseas, including WSB 95.5 FM and AM 750 in Atlanta Sundays at 7 a.m. The program is produced by the Alliance for Christian Media, based in Atlanta. For more information, visit the program’s website, www.Day1.org.