For as long as people have followed the way of Jesus, there has been foolishness.

A preacher I heard in college once tried to tell us that.  He was a British Methodist and he preached for fifty-five minutes.  But I hung on every word.  The accent helped but it was more than that.  He spoke about the eccentrics he knew in his life and the foolishness of the cross.

I heard another preacher in seminary tell us about the foolishness of the Gospel.  He reminded us of Judy Collins and sending in the clowns and rodeos in Forth Worth with clowns jumping out of barrels and entertaining the children until it was time to distract bulls from the cowboys who had fallen from them.  Fools and clowns and eccentrics and Jesus--all were telling us this was the way it had always been.

Later, I read the quotation from Flannery O'Connor about knowing the truth and the truth making you odd.  At first, I thought the quotation was funny, and then I thought it was wise, and then I wondered what most folks hear from pulpits and if they ever heard anything odd or foolish or wise in the way of God.

St. Paul writes to a divided church in Corinth about foolishness and wisdom.  Some of the divisions appear to be caused by differing views on which Jesus teacher is the most eloquent.  Paul admits no real gifts in eloquence in his letter; and if you have read the epistles of Paul, then you know he is quite capable of writing sentences that double back on themselves, before doubling back again.

In response to these divisions, St. Paul brings in Isaiah, a much more eloquent voice than his, to remind the Corinthians that God has often been in the business of confounding the wise and stopping up the tongues of the eloquent in order to teach what God's wisdom looks like, to subvert wisdom and power in order to offer another kind of wisdom and power.

If we are not careful, and many before have not been careful, then it is tempting to turn this passage into a diatribe against learning, to suggest that St. Paul is offering us a doctrine of "know-nothing-ism," celebrating the mind that is closed and empty and narrow.

But God did not create your head and your heart in order for them to wage a lifelong battle against each other.  God's wisdom has never asked that a book be burned or an image be destroyed.

God, through Christ Jesus, is offering us true wisdom.  Such wisdom can be handled by the weak and the poor and the unconnected and the invisible ones.  In fact, the very wisdom of God came to us as weak and poor and unconnected, an unlikely one not only to teach us the wisdom but to embody it too.

For St. Paul declares if you desire to understand God's wisdom, do not be overly concerned with the eloquence of the speaker but of what they say.  Have they proclaimed Jesus and him crucified?  In the life of the Crucified Christ, all things are redefined, all wisdom is shown to be simple, all power is shown to be weak, all life that runs from death is shown to be fleeting.

Jesus' life is given on the cross, not because God rages against God, but because God is no longer willing for false wisdom and false power to have the final say.  The life that died on the cross is the source of our life.  That statement is not easily taken in.  In order for that teaching to find room inside of you, all things false and destructive and distracting have to be let go of so you can hold on to the One who holds all things.

In the Eastern Church, the icon is called the Hospitality of Abraham, recognizing that Rublev is first depicting the visit of the three angels to Abraham and Sarah in Genesis 18.  These angels have come with the foolish news that Sarah is to have a child, even though she is old.  Their news causes Sarah to laugh.  What foolishness.

In the image of these foolish messengers, Rublev invites us to dwell with the story, to catch a glimpse of the God who is Three and One, the God who comes to us when we believe our life is at an end, only to hear from God that new life is emerging.

In this image of the Trinity, we see a community surrounding a table, with a chalice holding the center, with no one grasping for control or power, but offering each other expressions of grace, mercy, love and service to each other.  Here is our power.  Here is our wisdom.

Rublev gives his angels wings, golden wings.  Golden wings would be nice to have, if you were going to have wings.  But instead of hovering over the table, the angels sit, remaining grounded in this world, refusing to taunt us with flight.

God's wisdom has wings and understands all languages.  Yet, in the person of Jesus, God's wisdom is willing to be mocked, to be shamed and understood as foolishness.  God's wisdom is willing to take the blows of violent power and the slurs of arrogant wisdom in order to make clear that the things of violence and arrogance will not last, but what will last is the foolish proclamation that power can serve and wisdom can be found in the streets, in the desert, in the cave, the cell, the heart.

God's wisdom has wings and understands all languages.  Yet in the person of Jesus, we are invited in, with our stammering tongues, our backs without wings, to sit with the teachings of Jesus, to allow them to break out of the domesticated safeness of a Beatitudes refrigerator magnet theology, to pray through them and see what foolish things they say to us and then to follow such foolishness into the world.

Let us pray.  Almighty God, you know that we have no power in ourselves to help ourselves.  Keep us both outwardly in our bodies and inwardly in our souls that we may be defended from all adversaries which may happen to the body and from all evil thoughts which may assault and hurt the soul.  Through Jesus Christ our Lord, who lives and reigns with you and the Holy Spirit, one God, forever and ever.  Amen. 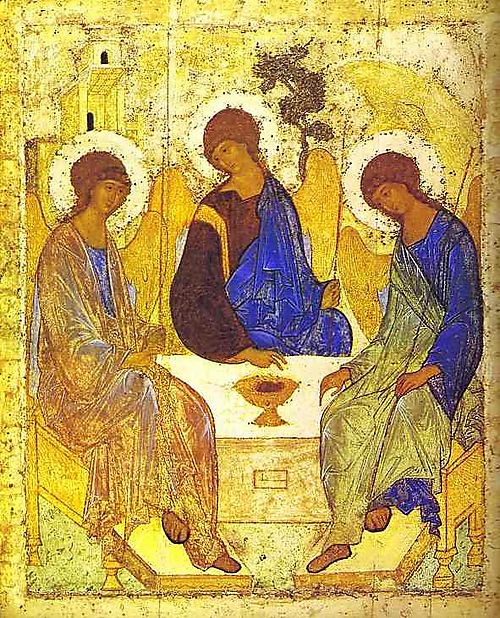