During its 189th Commencement ceremony today, Virginia Theological Seminary conferred a Doctor in Divinity, honoris causa, upon the Rev. Canon Louis C. Schueddig, president of the Alliance for Christian Media and "Day 1" in Atlanta, Georgia. The degree was awarded by the Rt. Rev. James J. Shand, bishop of Easton (MD), and chairman of the Board of Trustees of Virginia Theological Seminary.

Born in St. Louis, Missouri, educated at Northwestern University, and graduated with a degree in Radio, TV, and Film in 1970, Scheuddig earned his Master of Divinity degree at Virginia Theological Seminary in 1973. Ordained to the priesthood that same year by Bishop James Winchester Montgomery, he served first as an associate at St. Augustine's Episcopal Church in Wilmette, Illinois, and then for seven years as rector at St. Michael's Church in Grand Rapids, Michigan. He was then called to Atlanta to work for the Episcopal Media Center where he serves as President and Executive Director. He also serves at St. Philip's Cathedral as an honorary canon.

Scheuddig has seen his mission as connecting the Gospel to the world at large through contemporary media; in leading the Episcopal Media Center, Scheuddig has supported Episcopal advertising campaigns at all levels of the church, produced short videos and longer documentaries, hosted live broadcasts, and blogged and tweeted into the second decade of the 21st century.  He has covered crucial events in response to the needs of the world, including the 9/11 recovery, and relief and support after hurricane Katrina. He has served his diocese and the National Church, and worked as a transformative leader to bring about the collaboration of six mainline denominations to form the Alliance for Christian Media. This work has included support of Day 1 and its weekly, national sermon, formerly the Protestant Hour, and ventures into television films such as the animated version of The Lion, the Witch and the Wardrobe.

Since his graduation from Virginia Theological Seminary, Scheuddig has served for two terms as a member of the Alumni/ae Association Executive Committee(AAEC), as President of the AAEC in 1979, and as a member of the Board of Trustees from 1979-1985, which included serving on the Dean's Search Committee that nominated the Rev. Dr. Richard Reid as Dean and President in 1982.

In living out his vocation he personifies the church's outreach to proclaim the gospel of Jesus Christ "through all existing and emerging communications technology." His deep commitment to "serving people...who seek intelligent inquiry" has also equipped him to recruit and inspire several generations of strong lay leadership in support of his organization's mission.

Founded in 1823, Virginia Theological Seminary is the largest of the 11 accredited seminaries of the Episcopal Church. The school prepares men and women, representing more than 40 different dioceses and nine different countries, for service in the Church, both as ordained and lay ministers, and offers a number of professional degree programs and diplomas. 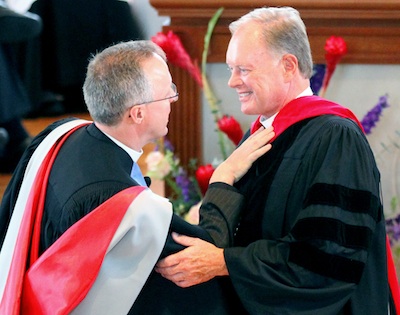